Share All sharing options for: The Flip-side of RBI's: Run Opportunity Creators 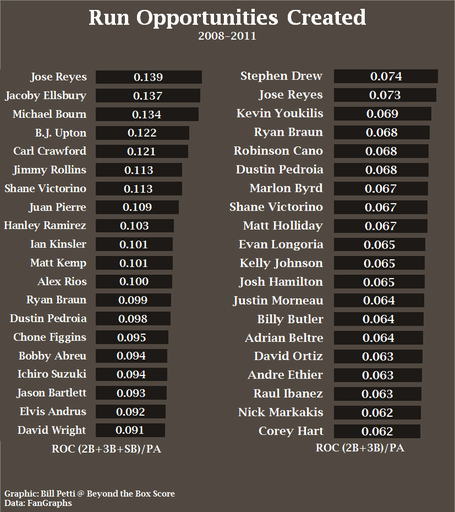 The debate about RBI's as a useful metric for evaluating individual players is getting a bit tiresome. It has gotten to the point where those who are willing to see that RBI's tells you as much about a hitter's teammates as the hitter themselves have come around, and the rest are simply not going to grasp the nuance.

In light of this fact, I thought it might be fun to look at who those players are that create the most RBI opportunities for their teammates. The graphic above presents for your amusement the top 20 Run Opportunity Creators (ROC) since 2008.

ROC is simple. It looks at the number of times a player puts themselves in scoring position per plate appearance. The graphic shows two lists; one where stolen bases are included, and one where it is omitted.

The lists change substantially based on what version we use. However, as a Mets fan I certainly feel a sense of pride that regardless of version Jose Reyes is right at the top. While his stolen base ability allows him to reach scoring position at a higher rate, Reyes is just as dangerous as any other hitter in terms of setting the table right out of the batter's box.

It should also be noted that Shane Victorino, as much as I dislike him, is also a top ROC regardless of whether we include stolen bases.

As with many things, this is meant to be tongue and cheek. However, it illustrates the point that all those RBI kings out there would have very different totals were it not for those ROCs hitting in front of them. (I'm looking at you, Ryan Howard.)

So let us now praise the run opportunity creators!