Share All sharing options for: Henry Rodriguez and A.J. Burnett Are Historically Wild

Henry Rodriguez, a middle reliever for the Nationals, is improbably leading the National League in wild pitches with 13. Over in the American League, A.J. Burnett is continuing his quixotic career by ratcheting his wildness up to unprecedented levels. He has an amazing 20 WPs so far, 7 more than any other MLB player.

What makes Burnett's and Rodriguez's wild-pitch totals so interesting is that they have come in relatively few innings. Burnett has only 166 and a third innings pitched, a very low total for a 20-WP pitcher, while Rodriguez has accumulated his 13 wild pitches in only 54.1 IP.

Here's how Burnett and Rodriguez stack up with their historical counterparts in wild pitch frequency. I measured this by finding the percentage of WPs thrown compared to the wild pitch opportunities a pitcher had--basically, how many batters he faced with runners on base*.

The graphic below features Burnett's and Rodriguez's wild pitch rates compared to the current record-holders for A) ERA-title-eligible pitchers and B) all pitchers with 50 IP in a season. I also included a range for the MLB average wild pitch rate across history (roughly 1.2% to 2.0%). 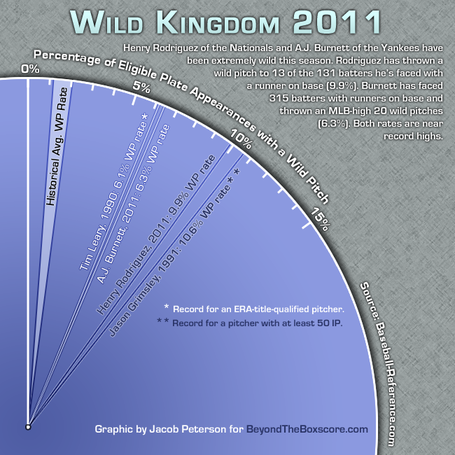 More factoids and analysis after the jump.

Burnett, even after avoiding wild pitches in his last start, still has the highest WP rate of any ERA qualifier since play-by-play data began in 1950 (and likely, all of MLB history). Here are the current top 5 WP% seasons of all time for an ERA-eligible pitcher:

Burnett's 20 WPs is 3 more than his previous career high. While he won't sniff the MLB record (Red Ames had 30 in 1905), Burnett has a great shot at cracking the top 10 wild pitch seasons of all time. He needs just 2 more. He will likely end up with the 2nd- or 3rd-fewest innings pitched of any 20 WP pitcher.

Rodriguez has the 2nd-highest rate of any pitcher with at least 50 IP, behind Jason Grimsley's amazing 10.6% rate in 1991. Grimsley was actually a starter that year (though he came in shy of the innings total for the ERA title), so Rodriguez is on pace for the highest wild pitch rate of any reliever since 1950. Here are the highest WP rates since 1950 with at least 50 IP (+ indicates a starting pitcher):

Rodriguez's 13 WPs is already in the top 10 for most relief WPs all-time. He is on pace to become the first reliever to lead his league in wild pitches since Mike Remlinger did it in 1997 (with 12). The reliever record is 16 WPs, set by Stu Flythe** in 1936 and tied by Jason Grimsley--him again--in 2000. Both Flythe and Grimsley threw 1 wild pitch as a starter though, so strictly for relief work, the record is 15 wild pitches. Hector Carrasco in 1995 and Dennis Higgins in 1969 both matched this figure.

I bring all this to your attention so that you may appreciate the historic wild pitch abilities of these two pitchers while there is still time left in the season. Let's hope that their scattershot arms are allowed to run rampant for the rest of the year.

* Technically, you can have a wild pitch with no one on, if you have a strikeout/wild-pitch combination, but I just counted runners-on PAs for simplicity's sake.

** Stu Flythe was in all likelihood the wildest pitcher in MLB history. Seriously, go check out his career numbers: 39 IP, 16 WP, and 61 walks. That's 14 walks per 9 innings to go along with the highest wild pitch/inning ratio in history.