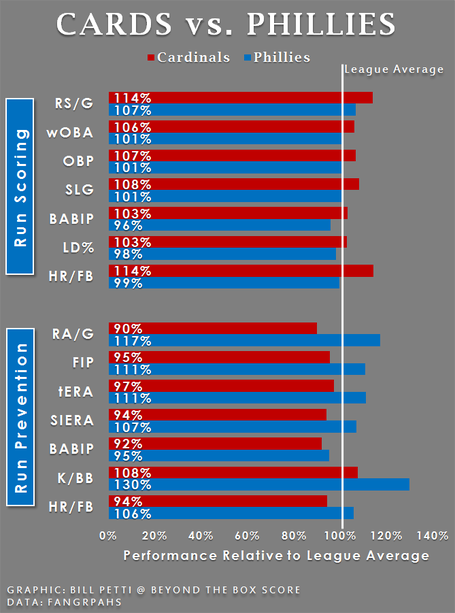 Saturday at 5:07pm EST, the Cardinals and Phillies square off for game one of their NLDS series.

Like the Rays, St. Louis found themselves improbably making the playoffs on the very last day of the season, courtesy of a Phillies sweep of the Braves. Now, the Cardinals face the Phillies and their historic group of front-line starting pitchers in a short series.

At first glance, this series looks like a total mismatch. While the Cardinals show a little more pop in their offense, the Phillies run prevention is just incredible.

The Phillies trio of Roy Halladay, Cliff Lee, and Cole Hamels have been dominant whether they are at home or on the road. All three are likely to garner Cy Young votes, as well they should.

However, the series gets interesting if you look at the Phils' performance against the Cardinals, in particular at Busch Stadium.

In nine games against the Birds, the Phillies gave up 3.81 runs per nine innings, their third worst against any team in the league. When playing at Busch Stadium, their ERA increased to 4.04. Now, the Phillies have not played in St. Louis since June, but considering that Busch Stadium is not exactly friendly to hitters it's worth thinking about.

That being said, the Cardinals draw a lot of offensive strength from their power, but the Phillies staff does a great job of preventing the long ball (second-lowest HR/FB against in the NL, and that's without the benefit of San Francisco's schedule or home park). Moreover, Matt Holliday only managed three home runs during the month of September, due in part to a sprained hand. Albert Pujols and Lance Berkman can certainly provide pop, but the Cardinals' chances would look a whole lot better with a solid-swinging Holliday in the line-up.

While these numbers suggest the match-up isn't necessarily a cake walk for the Phillies, it's hard to imagine losing three out of five when you can roll out Halladay, Lee, and Hamels for all five starts.

My prediction: Cardinals run out of gas, Philadelphia cruises to the NLCS with a series sweep.