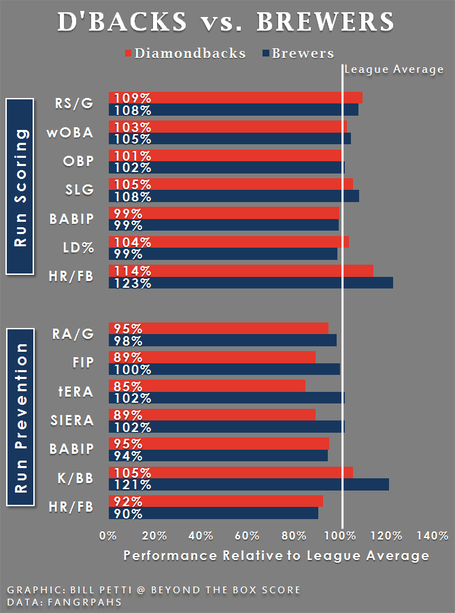 Saturday at 2:07pm EST, the Diamondbacks and Brewers kick-off the 2011 NLDS in Milwaukee.

The Diamondbacks emerged as the top team in the NL West, overtaking the defending champion Giants. Justin Upton turned in an MVP-caliber performance, leading the offense to a run scoring rate 7% better than the NL average. The pitching and defense, however, performed well enough to create a decent run differential (5% below league average).

The Brewers produced very similar numbers to the Diamondbacks, scoring runs at a slightly higher rate relative to league (9%), and preventing them at a near average rate (2% less than league average).

Both teams are capable of getting men on base (league-average OBP), and then driving them home with some significant power (+6/7% slugging, +14% and +21% HR/FB ratios).

The issue in this series will be the run prevention, particularly how Arizona handles the Brewers offense on the road.

The Diamondbacks were five games over .500 on the road this season, while the Brewers were three games under .500 when playing on the road.

Milwaukee sported the best home record in baseball (57-24), but saw their offense score .7 runs per game less when playing away from Miller Park. Meanwhile, Milwaukee's run prevention actually got worse on the road, to the tune of nearly .40 runs per game. That being said, the Brewers handle the Diamondback's offense pretty well on the road (2.31 ERA, .037 HR/PA, OPS+ against of 66).

The same can't be said for the Brewers offense. Milwaukee only managed an OPS+ of 86 against the Diamondbacks at Chase Field, largely due to one of their lowest BABIP in any park (.260).

Arizona was able to light it up offensively at Miller Park this year (OPS+ 122), while keeping the lid on the Brewers offense (OPS+ against of 91).

Of course, these teams only played seven games head-to-head this year, but if Arizona can steal at least one of the first two games in Milwaukee the series becomes very winnable given the Brewers' trouble on the road.

My prediction: Arizona pulls of the upset, three games to one.