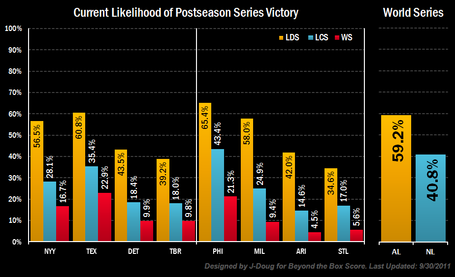 In this postseason debut of my 2011 projections--and for the first time since I started running the numbers--the Texas Rangers find themselves in the driver's seat. It's the first time since mid-August that an AL team is good enough to overcome their peers and the NL's 2-3% home field advantage to claim the top spot. So says our Log5 postseason simulator based on numbers from Baseball Prospectus.

As it stands now, the Phillies (big surprise) will host Texas' first World Championship. The two pennant winners will vanquish the Brewers and Yankees in the LCS.