It Happens Once Every 250,000 Septembers

Share All sharing options for: It Happens Once Every 250,000 Septembers

There's plenty of talk on the Twitterverse, in the blogosphere, and around other awkward neologisms about how improbable just last night was. As our own Satchel Price noted, last night included two Nolanesque comebacks-within-a-comeback. It's the unlikeliness of the larger comeback (and collapse) that I'd like to share with you here.

It's one thing to discuss this past September in the context of the playoff chances of individual teams. But for both St. Louis and Tampa Bay to make it? Well, the numbers seemed nigh on impossible. Posted below is a log-scale chart plotting the likelihood of both underdogs reaching the playoffs, as well as the chances of both favorites missing October. 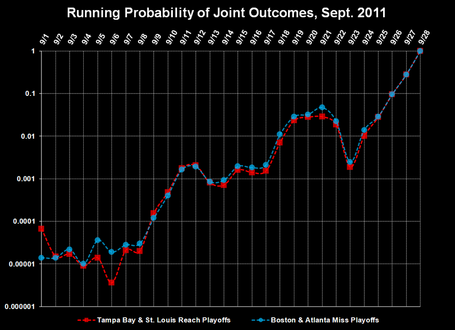 This chart has to be in log-10 scale. There is no other way to present the improbability of a Sox-Braves joint collapse or Rays-Cards joint comeback. Less than a week ago, the odds of either outcome occurring were closer to 1 in 1000 than 1 in 100. On September 4th, the odds for either joint-outcome occurring were a dismal 1 in 100,000. Two days later, the odds of both Tampa Bay and St. Louis playing October were a mind-boggling 1 in 250,000.*

Eh, what the heck. Here's the same chart on a typical base-10 scale: 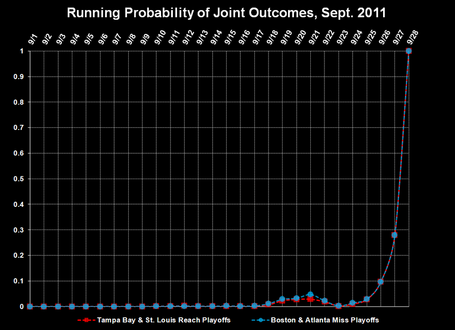 I suppose that better portrays the drama of this past September, if not the finer details of what we all witnessed.

Of course, the real odds on 9/6 of the Tampa Bay Rays and St. Louis Cardinals reaching the playoffs were probably better than 0.0004%. A proper Bayesian would update what he knew before with what he knows now. But even if we appropriately regress this figure toward the historical commonality of this race occurring (just under 1%) the "true" improbability would still be rather staggering.

As those in the mainstream media recounted last night's events--and the context that framed them--they used phrases such as "once-in-a-lifetime" or "won't-ever-happen-again." Well, the numbers agree. This certainly hasn't happened before, and it probably won't happen in our lifetime, or in many, many lifetimes following ours.

Apologies to Sox and Braves fans, but this is one for the ages.

*Baseball Prospectus lists Tampa Bay's chances of reaching the playoffs following the games on 9/6 as 0.0%. This is a rounding issue. Based on the wild card chances of the other AL teams, Tampa Bay's simulated playoff chances were at best 0.04%, but perhaps less. In other words, 1 in 250,000 might have been a tad optimistic.