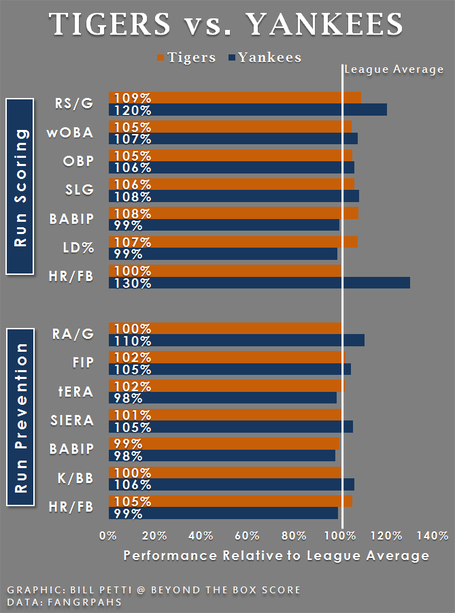 After the Rays and Rangers get the 2011 playoffs kicked off, the Tigers and Yankees will begin their ALDS series at 8:37pm EST in the Bronx.

As improbable as it seemed at the beginning of the year, the Yankees have cruised to the best record in the AL with both great hitting and above average pitching. The Yankees run scoring has been 20% better than the AL average, while their run prevention has been 10% better. A large part of their offensive dominance is their proclivity for the long ball. The Yankees finished the year with a HR/FB ratio of over 14%. That's just silly. And it wasn't all park. Yankee hitters posted a 12.9% HR/FB while on the road. These guys can hit anywhere.

The Tigers are no offensive slouches, mind you. They put up runs at a 9% better clip than the average AL team and were above average in just about every offensive category except HR/FB (league average).

For the season, the Tigers were about average in run prevention, despite the likely Cy Young winner anchoring the staff. And while the Tigers benefited from a weak division, they boast two pitchers entering the post-season that can handle any lineup in Doug Fister and Justin Verlander.

Detroit did not do a great job preventing the Yankees from scoring in their trips to the Brox this year. Tiger pitchers sported an OPS+ against that was 40 points worse than the league average when pitching in Yankee Stadium, 58 points worse relative to their own splits.

More troubling, Verlander had his own problems with the Yankees, posting his second highest OPS against when facing the Bronx Bombers this year. His K/BB ratio was one of the lowest against any team (16 K's vs. 8 BB's).

This series will essentially come down to two things: the extent to which Verlander and Fister can turn in dazzling performances against the vaunted Yankee offense, and whether or not the Yankees rotation can continue to pitch as well as they have.

The Tigers overall do a great job preventing home runs at home (7.6% HR/FB), but are one of the worst on the road(11.3%). End of the day, I think the Yankees bats will prove too much.

My prediction: Yankees in four games.