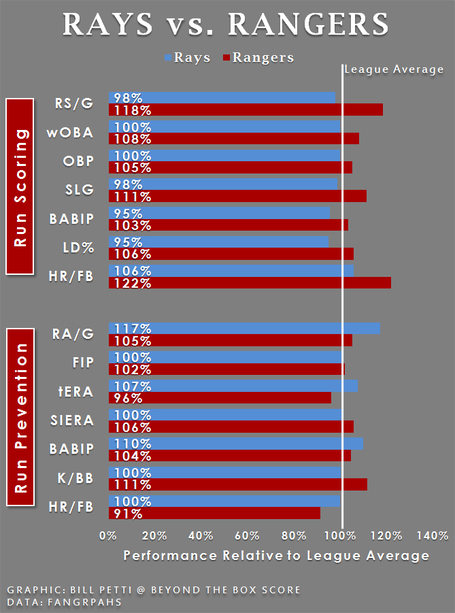 Friday at 5:07pm EST, the Rays and Rangers will kick-off the 2011 playoffs. The Rays landed in the playoffs in spectacular fashion and will have one day to regroup before heading to Arlington.

All year, the Rays rode their superior run prevention while the Rangers, while a pretty balanced team, slugged their way to the AL West title. However, we need to take into account park factors. Yes, the Rays run prevention was sterling this year, but they also play their home games in the second least-friendly park for hitters in the majors. Conversely, the Rangers played in the most run-friendly park in the bigs.

The big question, then, for this series is whether or not the Rays will be able to depress the Rangers offense enough on the road. This year, Rays pitchers have a HR/FB ratio of 10.8% on the road. That's a 2% jump from home and ranks in the bottom quarter for the league. Meanwhile, the Rangers offense boasts the second-highest HR/FB ratio in the league at home (15.2%).

The Rangers hit pretty well at the Trop this year, and were about average in terms of home runs per plate appearance relative to the rest of the staffs and parks they've played in. That's saying something, considering how much the Trop depresses home runs and how good the Rays staff is at home.

It's a tough call, as I absolutely love the Rays (I am an official fanboy). They have some tremendous talent position-player wise as well as a bevy of young, power arms. That being said, I am going to call this one for the Rangers, three games to two. They just have a fantastic lineup that seems able to hit, home or away, regardless of who is on the mound. And their pitching staff does a great job on the road.