How much of John Lackey's performance is attributable to Fenway?

Share All sharing options for: How much of John Lackey's performance is attributable to Fenway?

It's no secret John Lackey has been bad this year. Really bad. Like, how in the world is this guy still pitching for a playoff-contender bad.

Part of the difference can be explained by Lackey's BABIP, which currently stands at an absurd .340. Not surprisingly, Lackey boasts one of the worst LD% against among starters (22.7%). Combine that with the fact that the Red Sox are the third best defensive team according to UZR and it's clear that BABIP is not largely a luck issue for Lackey this year.

Clearly, Lackey has regressed as a pitcher, but this regression might not have been as bad if he were still pitching for the Angels.

Lackey's 4.76 FIP is nearly identifcal to his xFIP, given that his HR/FB % is a tad over 10%. What's interesting, however is that of the 20 home runs he's given up this year 12 have come at home. We know that Fenway is less friendly to fly balls than Lackey's old home in Anaheim. So what happens if those 12 balls were hit as a member of the Angels versus the Red Sox?

The answer: only 5 of those balls would have been home runs. 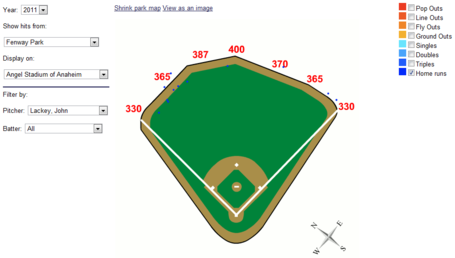 The graphic above was generated using the fantastic MLB Gameday BIP Location tool. You can see that of the 12 home runs hit at Fenway, 7 of them would not have made it out in Anaheim.

This isn't to say  Lackey is a good pitcher. Even without those 7 home runs, Lackey is likely to have given up a bunch of runs due to simply not having the same stuff he used to. But it does suggest that given the ageing we are witnessing the impact on his overall performance would not be as drastic if he were still pitching in a ballpark that was friendlier to fly balls.