Share All sharing options for: If the Season Ended Yesterday: Phillies Still Tops 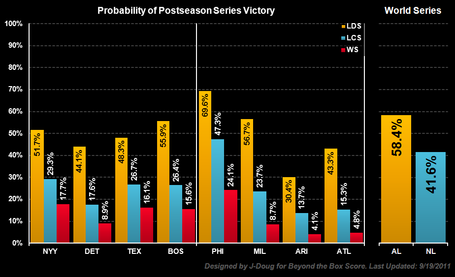 The playoff contenders have settled into four distinct tiers. On top, alone, we find the Philadelphia Phillies. One rung down we find the Yankees, Rangers and Red Sox. Occupying the penultimate position are the Detroit Tigers and Milwaukee Brewers. Finally, the Braves and Diamondbacks constitute the foundation for this lopsided pyramid. So says our Log5 postseason simulator based on numbers from Baseball Prospectus.

Moreover, there's an insurgency brewing just below the surface. The Tampa Bay Rays and St. Louis Cardinals are making a late run for their respective leagues' wild card berths with some help from the tumbling Red Sox and the bumbling Braves.

And might it actually make sense for the Yankees to take a dive against the Rays? Read the rest of the story after the jump.