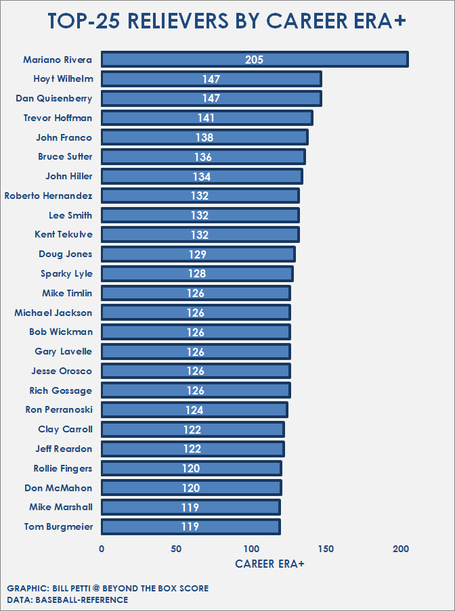 Last night, the Yankees Mariano Rivera saved his 602nd game, breaking the career mark set by Trevor Hoffman. Articles and commentary are all aflutter noting that with this record Rivera has solidified his place as the greatest reliever of all time.

Even if Rivera had never saved a single game, one could easily demonstrate that Mo was by far the most dominant reliever the league has ever seen.

Let's take a look at ERA+. ERA+ presents a pitcher's earned run average as a percent of league average. So an ERA+ of 102 means that a pitcher's ERA was two percent better than the league average. The chart above shows the ERA+ for the top-25 relievers of all time over the course of their careers (IP >= 1000).

Notice anything? Yes, Mariano Rivera isn't only the owner of the best ERA+ ever for a reliever, but it isn't even close. In fact, his ERA+ of 205 is the best ever by a wide margin for any pitcher that threw more than 1000 innings.

Below is a heat map of the same top-25 relievers for their career FIP, K/BB, and WHIP. Dark green is the best in each category, dark red the worst. It's easily apparent to anyone 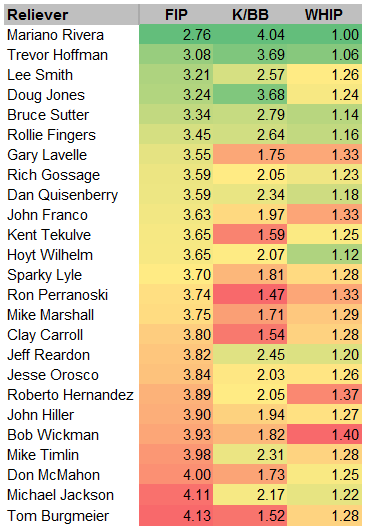 Even without the saves record, Rivera has shown himself to be the most dominant reliever the league has ever seen. The gap between Rivera and Hoffman gets even bigger when you consider that Rivera spent his career in the homer-friendly Bronx while Hoffman pitched in a pitcher-friendly park. Makes that FIP gap a lot bigger in reality.

J.D. is right that it's difficult to gauge and compare the relative worth of position players and relievers, but when you are the best there ever was in your role it's not a stretch to argue that Mariano was the greatest Yankee of this era.

He was certainly the greatest reliever of any era, saves or no saves.