Visualizing the Rise of 20/20 Players

Share All sharing options for: Visualizing the Rise of 20/20 Players 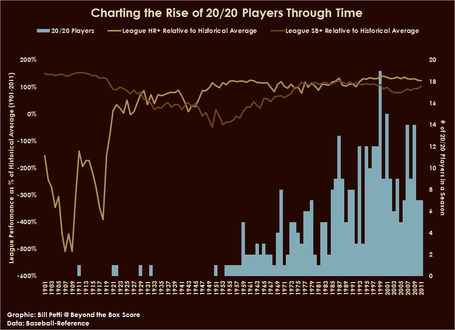 I wanted to follow up on Satchel's great piece yesterday on the continued prevalence of 20/20 players and their rise through time.

The question, of course, is what's driving the increase in the number of power + speed players over the past few decades.

I think Satchel is right that perceptions of what hitters' roles were changed (i.e. power hitters that had speed and base running skill were encouraged to run more, etc). Generally speaking, however, we see that over time the entire league changed in such a way as to facilitate the growth of these players. And it wasn't related to the long ball.

The chart above plots each season since 1901 and the extent to which home run and stolen base rates for that league were above or below the average season from 1901-2011. The bars represent the number of 20/20 players in each season.

What we see is that while the rise in home runs was certainly necessary for 20/20 players to emerge, it was not sufficient. The big change that occurred was the return of the stolen base starting in the 1950's.

Of course, this could fit very well with Satchel's theory that hitters of all types were encouraged to run more. As the league came to grips with the power game that emerged in the 1920's/30's there was a return to the historically more prevalent strategy of stealing bases.

This also fits with the changing athleticism of players over time, as the number of players with the power + speed combination has increased over time as well.

In either case, it is always fun to visualize the evolution of the game.