Share All sharing options for: Hurt by Their Era: 19th Century Pitchers, WAR/162, and wWAR 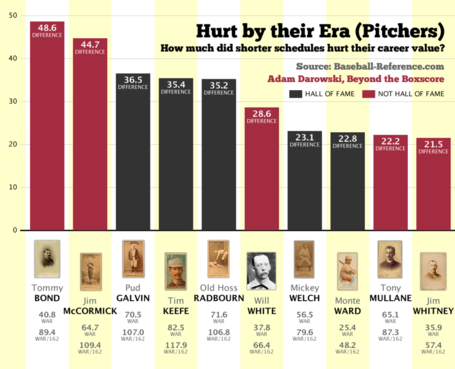 Click to behold a larger version of Will White's mustache.

When we last reflected on the ol' 1800s, I took a look at how WAR and wWAR underappreciate 19th century position players because of the shorter schedules of the period. To alleviate this, I normalized all offensive seasons to a 162-game schedule. We saw that Cap Anson, for example, lost out on about 70 WAR just because of the short schedules he played.

Today, I want to look at how this same approach effects pitchers.

While pitchers also had shorter schedules, they also were used in a much different way than today. Two-man rotations were commonplace at the time, and as a result 10+ WAR seasons happened far more often than they do today. These pitchers consistently hit WAE and WAM thresholds, which in turn caused their wWAR to skyrocket.

In the first version of the Hall of wWAR, I had a higher induction threshold for 19th century hurlers. While normalizing the schedule is a much cleaner approach, it actually makes 19th century pitchers fare even better than before.

Rather than going into some ideas about what I can do about that, let's talk about the graphic above. All ten pitchers listed threw in the 19th century. In fact, you have to go all the way to Walter Johnson at #16 to get a pitcher active exclusively in the 20th century.

After making this adjustment, here are the new Top 40 Hall-eligible pitchers in WAR/162:

Remember, this is all for the Hall of wWAR, so I'm only looking at pitchers who have been retired for five or more years. That's why you don't see Roger Clemens, Greg Maddux, Randy Johnson, etc. And wait, how does this adjustment actually hurt Fergie Jenkins? He was under replacement level (-1.0 WAR) in the strike-shortened 1981 season. Stretch that out over 162 games and it costs him another half a win.

I've always been using the Wins Above Excellence cutoff as 3.0 WAR and the Wins Above MVP cutoff as 6.0 WAR. I like how simple that is. Part of me wants to make the "excellence" level and "MVP" level variable depending on the era. That seems like a lot of additional complicated work just to solve the 1800s starting pitcher case. In my opinion, the current system works well for everyone else.

Another approach would be to simply handle it on a case-by-case basis. Looking at the list above, it's clear that Cy Young, and Kid Nichols, Tim Keefe are Hall of Fame/wWAR-worthy (whether or not you agree with all four being ranked in the top four all time). Then there's Jim McCormick. He's sixth all time among eligible pitchers in WAR/162. No matter how you look at it, he's one of the very best pitchers not in the Hall of Fame. I know that he'll get in no matter what approach I take. Pud Galvin, Old Hoss Radbourn, and John Clarkson are slam dunks, too. Next among the 19th century guys is Tommy Bond, Tony Mullane, Mickey Welch, Charlie Buffinton, Will White, Amos Rusie, Bob Caruthers, and Silver King. While we're talking about the 36-best pitchers ever by WAR/162, not all of them should ben enshrined in any Hall. In the first version of the Hall of wWAR, I inducted Buffinton, King, and Rusie from that group. The Hall of Fame has just Welch in.

So, one approach I could take is to keep the WAE/WAM model and just stop inducting 1800s guys when I get to a certain point. I feel I'll be doing a better job of identifying 19th century pitching candidates now that I'm normalizing across 162 game schedules and combinding offensive value with pitching value. Perhaps I just need to find an "obvious" cutoff among this small group.

That said, how amazing is it that even with these adjustments aiding old school pitchers we still see Rick Reuschel at 32nd and Kevin Brown at 35th?