All stats in this post are through Friday's games... Granderson went 3/3 with a homer and 2 RBI on Saturday.

Last week, I looked at the RBI opportunities for NL leader Ryan Howard. Short summary: he's good at driving in runners, but his RBI total is inflated by having a huge number of runners on base and unsustainable performance with runners in scoring position.

Okay, then. But what about other RBI leaders? Perhaps that sort of luck is a standard component of any super-high RBI total. 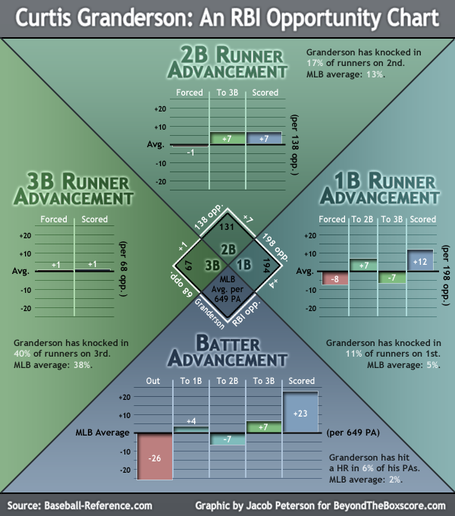 Granderson's average baserunner luck surprised me. I assumed that, as a part of that dynamic Yankee offense, he would have had a huge number of baserunners. Here is where his spot in the batting order has hurt him, though.

About 3/4 of Granderson's PAs have come in the 2nd spot. The Yankees' leadoff hitters (mostly Derek Jeter) have a .337 OBP, while their 9th-place hitters have just a .286 OBP. That 9th spot OBP is 50 points lower than any other in the Yankees' lineup, and the leadoff spot OBP is tied for 2nd-worst. So Granderson has not had the best hitters in front of him during most of his trips to the plate.

One area in which batting 2nd has helped Granderson is that it has enabled him to get significantly more plate appearances than he would if he had hit, say 4th. That's how Granderson can have 649 PA while Ryan Howard, who has roughly the same amount of playing time, has only 619. Given that Granderson has averaged an .17 RBI per PA, those extra 30 or so PA have been worth about 5 extra RBI.

Granderson's RBI total is quite dependent on his home runs. If he hit homers at a league-average rate in all situations, he'd have about 37 fewer RBI, or 74 total. So he'd have 1/3 fewer RBI if his homer rate were average instead of superb.

Next, let's look at how Granderson has done in each situation. The bottom quadrant of the chart shows how Granderson has done when ignoring baserunners. He's made 26 fewer outs than the average hitter in the same number of PA, but his tremendous home-run rate (he has 39) is the big benefit here. He has 23 more RBI than the average hitter based just on driving himself in on home runs.

When driving in runners on 1st base (right-hand quadrant), Granderson has similar numbers. He's caused slightly fewer forceouts at 2nd base, but it's his power that has helped him drive in 12 more runners than the average hitter in the same number of opportunities.

Granderson has also driven in 7 more runners than average from 2nd base, and 1 more than average from 3rd base. All told, he has 43 more RBIs than the average MLB player would have given the exact same number of baserunners and PA. That's 64% more on a percentage basis. For reference, Howard was at +36 (+50%) last week.

Unlike Howard, though, Granderson has not been lucky with runners in scoring position. In fact, his RISP numbers (.247 / .306 / .533) are lower across the board than his overall numbers (.264 / .366 / .555). Since most hitters actually do better with RISP (the league average is about 6% better, by OPS+), Granderson has likely been a bit unlucky in this situation.

There is one other area in which Granderson has perhaps been quite lucky, though: his home ballpark. Yankee Stadium in its newest incarnation regularly has quite high home run park factors. While his overall numbers are similar at home and away, he has homered once every 15 PA at home, but "only" once every 18 PA on the road, which is consistent with the theory that he gets a HR boost from Yankee Stadium.

According to the ESPN Home Run Tracker, 7 of Granderson's 20 homers at Yankee Stadium would have been homers at less than 1/3 of MLB parks. Comparatively, only 3 of his 19 road homers fit that description. Every player hits some lucky homers, but the data indicate that Granderson has been a bit more lucky than most. It's hard to say just how lucky, but he's probably gotten a few extra homers because of his home park.

Still, that wouldn't make a huge difference in his RBI total, and is likely outweighed by the fact that his hits have been sequenced in a less-than-ideal way (with relatively few of them coming with RISP). In all, I'd say that Granderson's total of 111 RBI is not terribly deceiving. In a completely neutral environment, he'd probably have slightly fewer, but he'd still be around 100, which is very impressive indeed. To the extent that RBI totals impress people anymore, that is.