Share All sharing options for: If the Season Ended Yesterday: Phillies Extend Lead 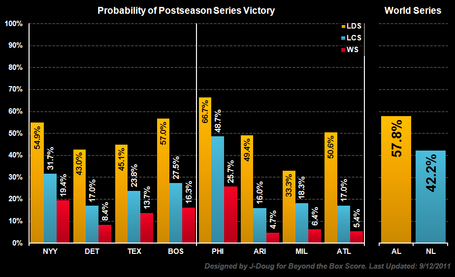 While the Phillies remain the safest bet for the World Series, the streaking Tigers and Rays--as well as the slumping Red Sox and Rangers--are complicating the picture. So says our Log5 postseason simulator based on numbers from Baseball Prospectus. More on the race for the Commissioner's Trophy after the jump.