We've just hit September, but already baseball pundits are fiercely debating who should win the 2011 Cy Young award. As the run environment has further declined this year we are left with numerous pitchers whose traditional and advanced statistics look fantastic. This makes the job of choosing a Cy Young winner in both leagues more difficult. Although, I guess that depends on who you ask.

Some think the awards have already been decided, with Roy Halladay in the NL and Justin Verlander in the AL leading the field. Halladay anchors the best rotation in baseball and has been arguably better than last year, while Verlander has seemed unhittable each time he takes the mound.

Both have truly been special, but it isn't as open and shut a case as many think.

For example, Doc Halladay has been great, but he doesn't look that different from Clayton Kershaw of the Dodgers. Per plate appearance, Halladay walks fewer batters and Kershaw strikes out more batters. Both have very similar ERA estimator scores (i.e. FIP, xFIP, SIERA, tERA).

I thought it might be interesting to introduce the Volatility metric I discussed last week into the debate and see what it might say about the Cy Young discussion.

As you might recall, Volatility for starters is all about how consistent their performances are with their seasonal Fielding Independent Pitching average. So, a starting pitcher with a FIP of 3.00 and a Volatility score of 1.40 will provide their team with a FIP between 1.60 and 4.40 in roughly 68% of their starts during the year. The metric says nothing about streakiness, just consistency on average.

Below is a chart showing the Volatility of the top 20 starters in baseball this year sorted by their FIP. The vertical bar in the middle represents the pitchers' seasonal FIP, while the length of the bars represent the pitcher's FIP range in 68% of their starts. 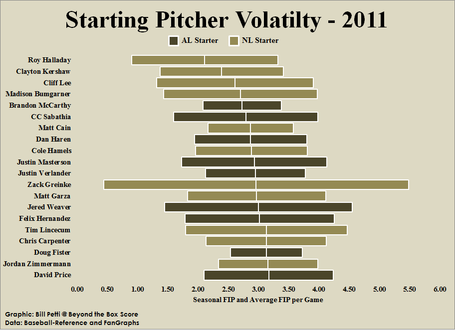 click to enlarge
Regarding the NL Cy Young race, we see that Halladay and Kershaw have both been pretty consistent. Halladay's Volatility score is 1.21 while Kershaw's is 1.02. Neither one of these pitchers was close to being the most consistent this year, but they were both so dominant that their higher Volatility still only meant a worse-case FIP of no greater than 3.41 68% of the time.
Given Halladay's lower FIP and given that Kershaw's Volatility wasn't drastically better than Doc's I think it's still an uphill battle for Clayton to lay claim to the NL Cy Young.
(On a side note, is it any wonder Philadelphia has been so good? Their three top starters are in the top-10 for FIP and have been very consistent. If you throw Worley in it gets even better. That's scary good.)
But what about the AL race? Justin Verlander has been a human highlight reel this year, and as Keith Law mentioned on the Baseball Today podcast last week, has likley won the narrative when it comes to the Cy Young. But there are some other fantastic pitchers out there that are closer to Verlander than some might think.
The one usually thrown into the mix is CC Sabathia. Sabathia pitches in a hitter friendly park in the toughest offensive division in baseball. His FIP is better than Verlander's (2.79 vs. 2.95). Their K% and BB% are very close (23.4% and 6% vs. 26.3% and 5.8%). The one big gap that I can find happens to be in the consistency of their performances.
Sabathia's Volatility score this year is 1.19. Pretty good in it's own right for a guy with a sub-3.00 FIP. But Verlander? He's sporting a .82. That's one of the lowest in all of baseball, and only Matt Cain has a lower score for a sub-3.00 FIP starter (.71)--and he did it in the National League.
So, sure, both Sabathia and Verlander have put up very similar numbers this year (more similar than some realize), but the fact is Verlander has been the more consistent pitcher, putting up a dominant start more consistently than Sabathia.
When pitchers are this good it becomes really tough to create meaningful separation between the two (or three) candidates. Volatility appears to be one more criteria that we can use to help evaluate pitchers of seemingly equal quality.