Share All sharing options for: An In-Depth Look At Ryan Howard's RBI Opportunities

Ryan Howard's 111 RBIs rank 1st in the National League (through Friday's games); his more advanced stats, however, are nowhere near elite levels. His .357 wOBA, for instance, is very good, but only ranks 48th out of 149 qualified MLB hitters, and 10th out of 24 first basemen. He has a 124 wRC+, which again is good, but not particularly noteworthy for a first baseman (Freddie Freeman and Michael Cuddyer has identical wRC+ figures, for instance).

Why, then, does Howard have so many RBIs? Is it just a function of hitting with more runners on base? Has he been fortunate in the sequencing of his hits and outs? Or perhaps there is something in his skill set that allows him to take better advantage of RBI situations than other players?

The graphic below breaks down Howard's RBI opportunities and how he has performed in each type of RBI situation this year (again, through Friday). The center portion breaks down Howard's opportunities compared to the average MLB hitter. The 4 surrounding regions focus on how good he has been at driving in and advancing runners from different bases. 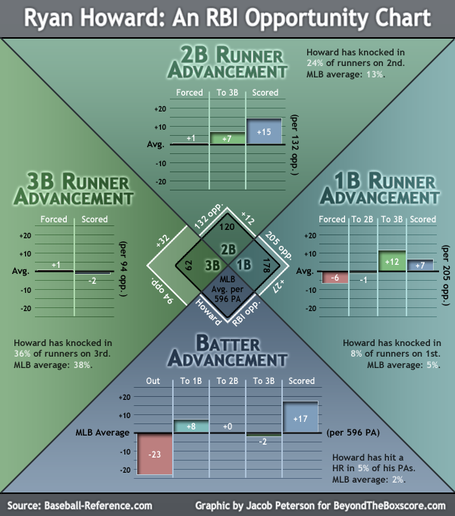 Starting in the center, we see that Howard has indeed had a relatively large number of RBI opportunities. He's batted with about 15% more runners on 1st base and about 10% more runners on 2nd. Those numbers are perhaps not much higher than the average cleanup hitter's, though (the averages are based on all hitters, not just middle-of-the-order guys).

What's really remarkable is that Howard has batted with more than 50% more runners on 3rd compared to the average hitter in the same number of PAs. These are the easiest runners to knock in, so this can't help but boost his RBI total.

Howard isn't just fortunate in when he bats, though, as the other graphs make clear.

The bottom region focuses just on the results of Howard's PAs; baserunners are ignored in this graph. Howard has been called out 23 fewer times than the average hitter, which is good, but it is his home run rate that really drives his RBI success. His HR rate is more than double the league average, which means he has driven himself in a whopping 17 times more than average for a 596-PA player. Remember, that doesn't include any runners on base when he homers.

Moving to the right-hand region, we see that Howard has been well above average at advancing runners from 1st base. While he has hit into a few more force plays than average, (note: I originally had him at +6 forceouts at 2B; that's wrong, it should be -6 as the revised graphic shows) He has driven in 8% of runners from 1st base, which is notably higher than the 5% rate of the average hitter. That's a bonus of 7 RBIs in Howard's 596 PA. He has also moved runners up to 2nd and 3rd base much more than average.

Finally, we get to the runners on 3rd base. While Howard has had an obscenely large number of runners on 3rd for his at-bats, he has driven in only an average number of them. This is probably influenced by his low contact rates; many times, just putting a ball in play will score a runner from 3rd, but strikeouts will rarely do the trick. Another factor here is that a single is just as good as a home run at knocking in a runner from 3rd base; Howard hits relatively few singles compared to an average hitter, thus negating some of the advantage provided by his power in these situations.

Still, If we tally up the results, we see that Howard has driven in a total of 37 extra runs compared to what a league-average hitter would have done given the same baserunner circumstances. That's the difference between his league-leading total of 111 and Carlos Peña's 74, which ranks just 13th among first basemen. If you're quick with math, you may also have noticed that 111 is exactly 50% more than 74.

That's not to say that Howard is 50% better at driving in runs than the average hitter; we still haven't separated out other factors. For instance, the quality of the baserunners who have hit ahead of Howard has been quite high. Shane Victorino and Chase Utley, in particular, are excellent on the bases (this could also help explain why Howard has had more runners on 3B than a typical hitter).

Roughly three-quarters of Howard's RBI advantage over the average hitter stem from home runs alone. If Howard had hit home runs at the leaguewide 2.4% rate in all situations this year, he would have a total of 27 fewer RBIs (or 84, one more than Michael Morse has in 90 fewer PAs). Given that his power numbers are right in line with his career norms, there is every reason to credit Howard for these homer-driven RBIs.

As for the remaining 10 or so RBIs above average, Howard has also almost certainly benefitted from fortunate sequencing this season. His OPS+ is 30% higher than average when he hits with runners in scoring position, but that is not sustainable.

For his career, Howard's OPS+ is 13% higher with RISP, markedly lower than this year's 30% mark. Once you take away Howard's huge number of intentional walks in these situations (almost half his total walks), his career OPS+ drops to only 7% better than normal with RISP. That's almost identical to the leaguewide figures, which this year are 6% higher with RISP.

So Howard does not seem to have the ability to hit notably better with RISP, indicating that this year's performance in that situation has been a fortunate fluke.

In conclusion, when it comes to driving in baserunners (and himself) Howard's results this year have been quite good, even given the high numbers of baserunners he's had to work with. That shouldn't be confused with saying that his abilities are on an elite level, though. He's certainly well above-average at driving in runners, thanks largely to his prodigious power, but he likely would not be leading the league in RBIs if he had not been fortunate both in the sequencing of his hits and in the excellent on-base abilities of his teammates.

Given neutral luck and average teammates, Howard would likely have around 80-85 RBIs--a very good total but well shy of the levels that typically inspire serious MVP consideration from the traditional baseball media.