My Hopes and Fears for ESPN's Numbers Never* Lie

Share All sharing options for: My Hopes and Fears for ESPN's Numbers Never* Lie 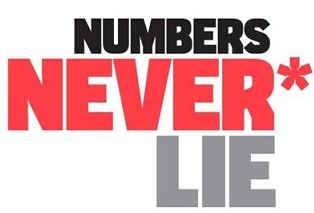 According to Marcia Keegan, ESPN's VP of Production:

"Numbers Never* Lie was developed for the fan craving statistics, whether it is the traditional box score or in-depth fantasy analysis. Like all sports fans, we actively engage in lively, stat-driven sports discussion around the water cooler.  This show will capture some of the most debated topics."

It appears that for 30 minutes the show will feature debate and discussion by the show's two hosts, former athletes, and "ESPN analysts and statistical experts" on the meaning of various statistics.

On the surface, this seems like a great idea. Any show that focuses on sports analytics is, I think, a step in the right direction, provided that the discussion is conducted by those that truly understand sports analytics.

It's on the latter point that I am a bit concerned.

Statistics, particularly advanced analytics, gets a bad rap typically because of two things: 1) People debating the value of these statistics don't actually understand them, or 2) People purposefully manipulate data to make their point, hence the old saying "Lies, Damn Lies, and Statistics".

Numbers don't lie, people do. People can also misinterpret or misunderstand numbers, leading to faulty conclusions. Both are equally dangerous in my opinion.

My hope is that this show focuses on numbers not just for their own sake (e.g. "wow, John Doe hits .450 during day games that take place on Tuesdays!"), but for how they inform our understanding of the games we love. To do that, the hosts and panelists need to have a firm grasp of statistics and analysis, not just individuals that are gifted in front of the camera. Discussing numbers is one thing, but understanding the meaning and limitations of those numbers is something completely different.

My fear is that the show will focus on sensational or surface-level statistics that really don't mean that much and will try to draw too many conclusions from them. This fear is based on, well, what the majority of sports talk shows do on a daily basis. This would be bad for a number of reasons, not the least of which is it gives the viewing public the wrong impression about sports analytics.

To be fair, I have not seen a second of this show or read much beyond a few press releases and reports. (ESPN hasn't done the best job of promoting the show, in my opinion.) I definitely plan on tuning in or catching a replay (given that it airs mid-afternoons) and hope that it turns out to be a great show. But I admit I am worried, only because the intelligent use and discussion of statistics in the mainstream media has unfortunately been, well, hit or miss.