Share All sharing options for: Cheap Wins vs. Tough Losses 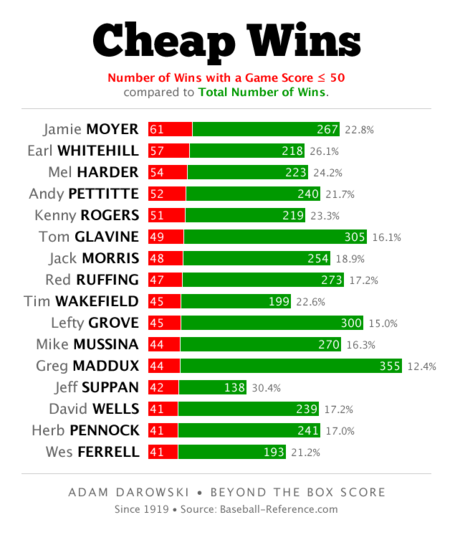 Last week, I posted a graphic about Tough Losses. In that graphic, I used a slightly more strict version of the Quality Start (mine was 7+ IP with 3 or less ER). A logical next step for that was to research "Cheap Wins". I found it problematic to use IP and ER to determine that list, however. The longer a pitcher throws, he offsets the damage an earned run causes. It was tough to find one search that did the trick for me. So, I looked for something else. I turned to Game Score.

The above graphic shows the most wins since 1919 with a Game Score less than or equal to 50. If you're not familiar with Game Score, 50 is actually the number you start with. You can add or subtract to that score by finishing innings and striking players out (good) or allowing runs and walking people (bad).

LIke my IP/ER combination before it, Game Score is problematic because it is not part or era adjusted. Kenny Rogers, for example, has the double whammy of pitching in Texas and pitching the steroid era. Our friend Jack Morris, on the other hand, doesn't have much of an excuse.

No matter how I tried to search for cheap wins, Earl Whitehill nearly always came back at the top of the list. Considering his comparatively modest win total of 218, that was surprising. But he played during the offensive explosion of the Ruth era and clearly had some good luck, too (.541 winning pct. vs. 100 ERA+).

Greg Maddux makes this list, mostly because he recored one million wins in his career. Some were bound to be cheap. His 12.4% is actually pretty low. Jeff Suppan, on the other hand, has posted a Game Score of 50 or less in over 30% of his career wins.

How does the Tough Losses list look if you use Game Score? In order to normalize the list a bit, I searched for a Game Score that would yield a leader similar to our Cheap Wins graph. I picked 65 as the baseline for Tough Losses because the leader suffered through 57 of those losses: 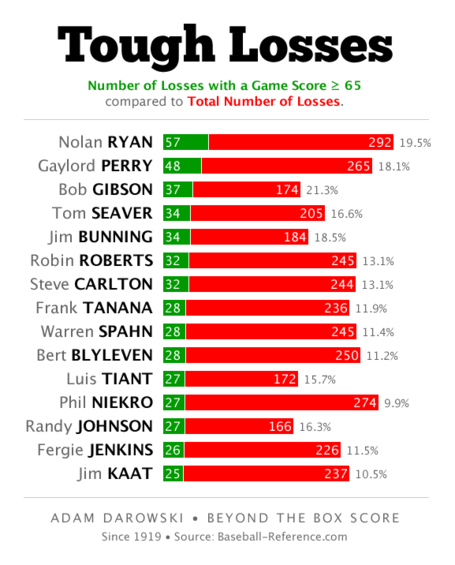 It is amazing how often Nolan Ryan and Gaylord Perry were victimized. Part of it is era, of course. But Bob Gibson's total is most certainly era-aided, and Ryan and Perry still trump him. The top three on my previous graph (Ryan, Perry, and Robin Roberts) all appear in the top six here, so the lists are fairly similar.