Measuring the Growth of Sabermetrics

Share All sharing options for: Measuring the Growth of Sabermetrics

For many years, sabermetrics was just a small, isolated island in a larger baseball world. Pioneered largely by Bill James, few were aware of the field and fewer practiced it. Fast forward to today, and this is no longer the case.  Sabermetrics is now melting with mainstream baseball. Many major league teams engage in sabermetrics in at least a limited capacity, and now even ESPN is mentioning hallmark statistics like FIP on Baseball Tonight.

The proliferation of sabermetrics can be largely attributed to the rise of the internet, which gives an appropriate medium for many types of baseball discussion. Websites, such as the very one you are reading, provide for an excellent forum from which to learn. As such, it seems that it would be appropriate to measure the growth of sabermetrics using the internet, specifically using tools like Google Trends. 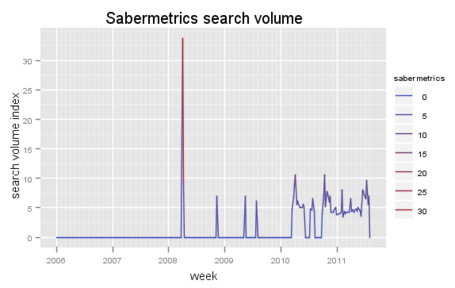 As you can see, the rate of searches for sabermetrics on google has soared in late 2010 and 2011. Also of interest here is the spike in search volume in early 2008, which I do not have an explanation for.

If we add in a trend-line and focus on it, the growth strongly resembles an exponential growth curve: 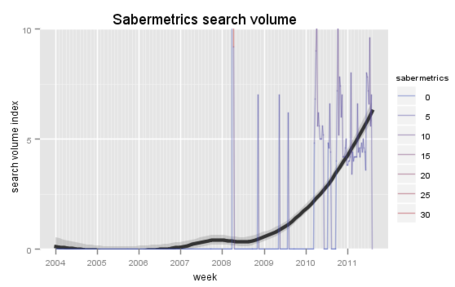