Looking at Allowed wOBA vs. Expected For AL Pitchers

Share All sharing options for: Looking at Allowed wOBA vs. Expected For AL Pitchers

Being a fan of a team from the American League East can be trying at times as other teams around Major League Baseball don't appear to be playing the same game. Sure, the bases are 90 feet and the mound is 60'6", but when it comes to the guys at the plate it's a bit of a different story due to the issue with unbalanced schedules. Previously, I made an attempt to quantify this (dis)advantage using the numbers from 2010, but this go around I'd like to take a different tact that looks squarely at the pitchers of the AL.

The idea here is pretty simple. We're looking at how all batters faced have performed against a pitcher's handedness over the course of the season, and compare that to how well the pitcher actually did against these batters. An example is probably in order so think of it like this: we can look at all the batters that faced, say, Josh Beckett and get a wOBA figure for how those batters hit righties on the year. In this instance, the set of batters that Beckett has faced have a collective weighted wOBA of .320 (all data valid as of July 30, 2011) against all right-handers while that same set of batters have hit for a wOBA of .242 against Beckett. Similarly, the set of batters that have faced CC Sabathia have hit for a collective weighted wOBA of .327 against all lefties, while the Cy Young favorite has actually allowed a wOBA of .280.

This now gives us a chance to compare pitchers based on the difficulty of lineups that they've faced. Another Cy Young favorite is Jered Weaver who has been very impressive allowing a wOBA of .245 against, but the set of batters he has faced has only combined to put up a wOBA of .310 over the course of the year. Now comes the question of which is better an actual of .245 when you'd expect .310 or an actual of .280 when you're expected to allow .327?

Initially, I wanted to look at this as a simple percentage of Actual/Expected to give an idea of which guy has most out-performed expectations. After thinking on it, it works better if you square both terms so that you can better separate those that had an easy go of it and excelled from those that performed roughly the same against much stiffer competition. I'm calling this d^2, but a rose by any other name would smell as sweet and if you're into visual expressions it looks like (Actual wOBA^2)/(Expected wOBA^2).  Here is a ranking of each of these pitchers by d^2:

More after the jump...

This looks at the top six pitchers by innings as of July 30th for each of the AL teams. There are certainly a few tiny samples in there, but I think you will find most of this pretty interesting. Another caveat is that only batters with 10 or more plate appearances were calculated as all others were thrown out.

We can see that teams in the ALE indeed have a tougher row to hoe as the batters they've faced have a simple average wOBA of .327 compared to .319 for the Central and .312 for the West. The actual wOBA allowed is pretty interesting to me. ALE pitchers have performed slightly worse than you would expect, while ALC pitchers have performed exactly as expected, but ALW pitchers have been lit up like the proverbial Christmas tree (or Menorah, if you prefer) allowing a much higher wOBA than you would expect.

The next natural progression is to look at how each team has fared: 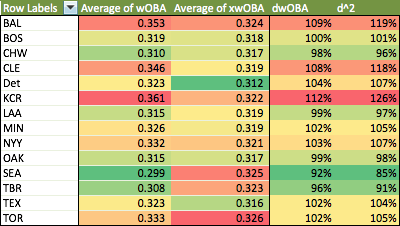 Green is good and red is bad. We can see that Detroit, Texas, Chicago and Oakland have seen some of the lightest competition to date with Toronto, Seattle, Baltimore, and Tampa Bay seeing some of the toughest competition. Each of these teams has handled that differently as you can see for yourself, but it's really fascinating, to this analyst, that Seattle and Tampa Bay have also had the two best actual wOBA against despite facing such difficult lineups. This leaves them head and shoulders above the other AL teams with their d^2 of 85% and 91%, respectively. It shouldn't come as much of a surprise that Kansas City and Baltimore have fared amongst the worst as both feature pitching staffs that remind me of the Rolling Stones song "Shattered."  You can use this to see how your team has fared and then you may want to look above to see the reason for these team-wide outcomes.

I highly recommend the downloading the EXCEL WORKBOOK so that you can take advantage of the filters as well as make your own pivots. I've removed the individual pitcher data as it would have led to wayyy too many tabs for this, but I hope you find the download useful. I'm curious to hear any and all feedback on this as it's something I'd like to refine and re-work going into the offseason for all starting pitchers in MLB with 100+ innings.