Who Gets the Scoop? Number of Correct, First Reported Deals in July

Share All sharing options for: Who Gets the Scoop? Number of Correct, First Reported Deals in July 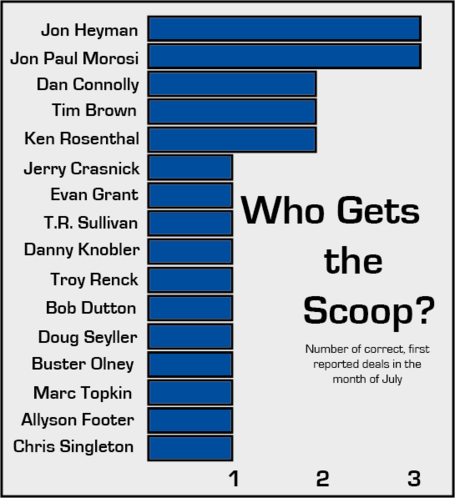 Back when I constructed my previous scoops standings, several questions arose. One of which was a common one, and was basically along the lines of "how can we be sure of the accuracy of these reporters?" Well, I'll tell you this. To quickly hammer that one out, the only two incorrect reports throughout the last month were by Ken Rosenthal, who mistakenly suggested the Rangers had acquired Heath Bell when they really were in on Mike Adams and Adam Kilgore, who said Todd Coffey was about to be dealt. Sure, in a system such as the one I've put together contains flaws, and is expected to posses them as well. But it's much, much easier to march through those flaws and examine all variables here since there are fewer deals that took place than say, the off-season, which is known to consist of at least one-hundred and fifty.

Another question frequently asked is quite a valid one, one in which I can again answer without much difficulty. I remember Bill Petti, our very own Bill Petti asking me if there's a way to determine the density of these reports. For example, do standings matter if Reporter A breaks thirty stories all regarding Jerry Hairston Jr.'s of the world while Reporter B reports only three or four deals, but all of which containing more prominent names. For instance, Ubaldo Jimenez. Troy Renck, who was only first to break one story made his mark quite appropriately. He broke the Ubaldo Jimenez rumor, and mad props to him for doing so.

Again, the system is simple. Per MLBTradeRumors.com, the reporter to break the news of an agreement or deal in place gets a point, or a scoop. Two reporters who are actually on this list spoke with me the last time I compiled these standings. One of them (who is consistently at the top of the list) told me that he really does value getting a scoop and being first while the other told me he doesn't really care considering other reporters commonly add details throughout the process. In any case, I'm drinking the half-full glass and going the former reporter's thoughts. The reason? Well, because these standings are quite fun to compile and do mean something, if not the story's entirety.