Share All sharing options for: If the Season Ended Yesterday: BoSox, Phils Neck-and-Neck 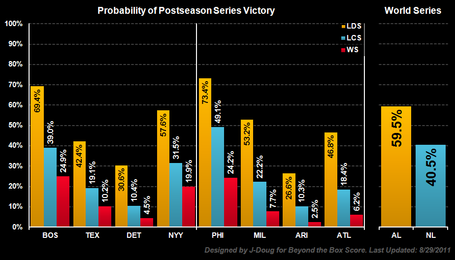 The Boston Red Sox have dethroned the Yankees in the AL East (at least for now), driving most of the changes in the playoff probability numbers. Boston's best are now in a dead heat with the Phillies as the favorites for the World Series, both coming in at 3:1. The Yankees dropped into the 3-spot as a result of their recent skid. So says our Log5 postseason simulator based on numbers from Baseball Prospectus.*

There's a lot more to this story than likely World Series winners, however. Keep reading for the rest of it.

*We've tweaked our system since last week, fixing an error in the home field advantage calculation. See methodology below the jump.