"Sons" of MLB: Exploring the Impact of Patronymics

Share All sharing options for: "Sons" of MLB: Exploring the Impact of Patronymics

Every major leaguer is somebody's son (at least until we see the first female player). However, only a select few have "son" at the end of one of their names. This post is about those truly special players and the often oddly named men who inspired the "-son" names, which for my money are some of the best names around.

I searched far and wide (on Baseball-Reference) to find all the major leaguers to have A) appeared in a major league game this year and B) been blessed with the "-son" suffix. All in all, I came up with 83 players, 49 with a "-son" surname and 34 with a "-son" first name.

I know what you're thinking: "But who are these fine players the sons of?" Allow me to show you: 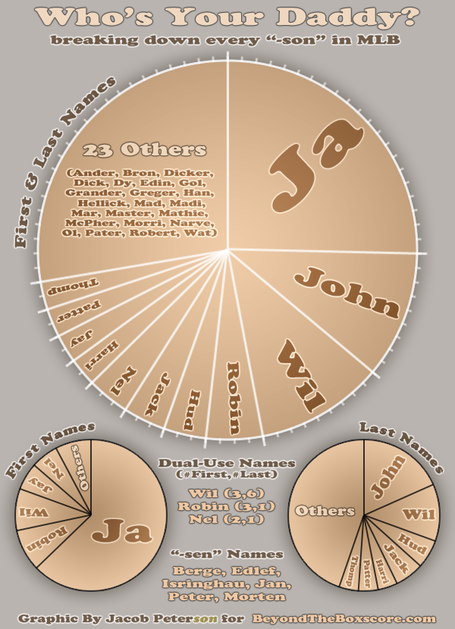 "Jason" was by far the most common "-son" name in MLB*, with a whopping 21 players (not counting the 2 "Jaysons"). That's more than a quarter of all the "sons" in baseball, and nearly two-thirds of the "-son" first names. Fun Fact: 36% of the Jasons in MLB history have appeared in a game this year.

The most common last name in the group is "Johnson," with 9 players. "Wilson" also has 9 players, though it is split between 6 last-name Wilsons and 3 first-name Wilsons. That makes it the 2nd-most popular name in each group. Don't worry, Wilsons. You just hang on and maybe you'll be the most popular someday.

Some of the patriarchs that inspired these names had very interesting names themselves. I've never heard of anybody named "Narve" or "Hellick" or "McPher," yet they all apparently had sons who adopted patronymic forms of those names.

Sadly, there were no players to feature the coveted dual-"son" name. The last such player I can remember is Jason Johnson. I'm sure there have been others.

I reluctantly added the bastard "-sen" names as a footnote in the graphic above, though I did not include them in the tabulations. I try to be open-minded about these things, but really, last names like "Petersen" with 3 e's just don't seem right.

I didn't include other patronymic forms, notably the Spanish "-ez" names. Those are very prominent today, but really, they require another post.

Historically, "-son" names have been quite prestigious in MLB. In fact, you could make an excellent all-time team of just "-son" players. You could start with Ricky Henderson, Reggie Jackson, and Frank Robinson in the outfield. Put Brooks Robinson at third base, Hack Wilson at first base, and Jackie Robinson at second base. Shortstop is a bit sparse, but we still can call upon Hall-of-Famer Travis Jackson. Andre Dawson can DH (bad knees, you know). Thurman Munson (or, if you prefer, vintage Jason Kendall) completes the lineup at catcher.

The starting rotation would be pretty good, too: Walter Johnson, Randy Johnson, Christy Mathewson, and Bob Gibson. That's 4 of the top 13 pitchers since 1900 in Baseball-Reference's version of WAR. Larry Jackson or Tim Hudson could be the 5th starter if one was ever needed. With that starting staff, the team won't need a reliever very often, but when it does, it can call upon Mike Jackson, Gregg Olson, and Jeff Nelson, among others.

* Yes, I know that some of these names do not literally mean "son of" someone. "Jason," for instance, means "healer." The -son ending is just a coincidence. But I felt that it was best to be inclusive, given that I didn't really want to research the etymologies of all these names.