Share All sharing options for: Musing on Sergio Romo's Slider and Platooning

Hopefully Sergio Romo gets off the DL soon, because he is incredibly fun to watch.  Though Brian Wilson’s popularity might have you thinking otherwise, Romo is the original bearded reliever on the Giants.  He’s also the best reliever on the Giants.  He has an xFIP of 1.64, which would be lowest in the majors if his 37 ⅔ innings made the service time criterion.  His game is getting a ton of strikeouts while keeping his walks low - this year, he’s averaging over 12 and a half strikeouts per 9 innings while walking under ONE.  Unfortunately, he’s been sidelined recently with an arm injury that isn’t supposed to be too serious; he hasn’t thrown in a game since August 9th.


Romo slings a fastball (a riding four-seamer and a sinking two-seamer) in the 89-90 mph range, but his primary pitch (making up more than half of his pitches this year) is a slurvey, 79 mph slider.  He throws from a three-quarters motion, so he will generate more side-to-side movement on his pitches than will a pitcher coming from a higher angle.
His slurveball is a good example of this, as illustrated by the table below:


With almost 9 and a half inches of horizontal movement, it cuts about half a foot more than the typical righty slider while having similar vertical "drop."  That creates unique one-plane, "sideways" action.  It’s certainly bode well for Romo, as his slurve has been very good at missing bats, picking up a whiffs-per-swing rate of 49% this year (and 52% last year).

Something that surely many people wonder about is why manager Bruce Bochy limits Romo’s playing time so much - before his injury, his 37 ⅔ innings was low for a pitcher with such good numbers.  A lot of it had to do with limiting Romo’s competition to right-handed batters.  Coming into this week’s play, Romo faced 71% same-handed (righty) batters, which is second highest in the majors to lefty Randy Choate (72%).  For his four-year career, Romo has an xFIP of 2.60 against righties and 3.97 against lefties, which basically tells us he’s dynamite against righties and still good against lefties.


With this in mind, let’s return to Romo’s slurveball.  If a right-handed pitcher has a pitch that slides as much as Romo’s does, it can be extremely effective against same-handed batters because it can look like it’s slightly off the plate and then dive away.  But against against a left-handed batter, the pitcher runs the risk of hitting him with the pitch, even if it might be enticing.  Romo’s slider plate locations in 2011 are below, with his 30 sliders against lefties highlighted. 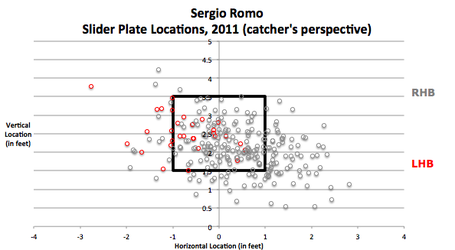 Obviously, 30 is not a huge sample, but it’s clear that Romo hasn’t been comfortable locating his slider against lefties.  The graph (from the catcher’s perspective) shows the density of pitches that cross the plate on the outer half of the zone or off the plate away.  They’re against righties, who will see the pitch cutting away from them.  Against lefties, however, he’s forced to backdoor it.  That can be fine if he keeps it on the outside corner, but that location takes away the bat-missing abilities it has against righties.

So, even though it may not seem reasonable to cut such a successful pitcher’s playing time so much, I don’t think it’s an outrageous move at all to reserve Romo for (mainly) right-handed competition.  That way, he can use his slider most effectively.
The data here are courtesy of Joe Lefkowitz's PITCHf/x tool.
*****

This will be my last piece as a featured writer for Beyond the Box Score.  I would like to thank my co-writers here at BtB for being such supportive teammates and overall good-guys, and a particularly big thanks to Justin for, honestly, everything.