The Art of Scouting: How to Compile a Professional Scouting Report

Share All sharing options for: The Art of Scouting: How to Compile a Professional Scouting Report

Scouting athletes on a baseball diamond is a form of art. When a human’s eye glances at a prospect, whether it be a pro or an amateur there will always be differing opinions. Like artists, if all scouts were the same every organization would be identical and at that point, scouting and player development wouldn’t be such a crucial factor toward success. There’s no right way to go about evaluating talent even though some evaluators are better than others and on the same token, even the best eyes for talent still are by no means perfect.

With that said, you can posses the most expensive radar gun and sit in the best scouting seat in the house and still go about player evaluation the wrong way. You’ll find some of the strangest athletes in baseball in addition to the rare 5-11 right-handed pitcher topping out at 85 who profiles as a number three. When a scout drools upon a player who most normally wouldn’t there has to be at least some proof, whatever way which possible to quantify the preliminary madness. And that my friends is what they call a "scouting report."

Major league franchises have somewhere from around 30-50 (or more) scouts in their organization. A good chunk -- say 20, perhaps -- are pro scouts. Pro scouts are given all sorts of assignments, generally in the area in which they live. Some, however, are not given regional assignments and instead make their way to wherever the organization asks. So let’s say Johnny Scout lives in Long Island, NY. He’ll likely spend the first few months of the season watching amateur showcases or the last several starts of projected first round college arms in the Northeast Region. When short-season ball begins he’ll shadow the Staten Island Yankees, Hudson Valley Renegades, and Brooklyn Cyclones. Additionally, Johnny Scout will spend time watching the New Britain Rock Cats, Trenton Thunder and even the Lakewood Blueclaws. Other scouts will spend several weeks only following one team. For instance, I know a scout who spent the last week of June and first couple of July following the Aberdeen Ironbirds, wherever the hec they traveled.

The problem with scouting is that the general public think "OMG, if I become a scout I get to watch the best prospects in baseball play every, single day!" Well, maybe not the entire general public, but some. When a scout watches a team for several days at a time (which is usually the case) he has to file a report on either every player he’s assigned to (at times everyone who plays while the scout is in attendance) or just a handful. Not every team has top prospects. In fact, most teams, especially in the New York Penn League don’t have any, if not one at most. Johnny Scout will watch and take notes on the eight players he’s assigned to and six more. Those six are listed as "follows." "Follows" are players to whom Johnny Scout is oblivious before having seen them play, but impress Johnny enough to list them as "follows." The scouting director and Johnny Scout will do as such.

When a prospect website or blog compiles a scouting report, they are applying to a fanbase that has some intentions of getting to know the player as well.  Those writers are in some ways storytellers as they want to present it as an article rather than just a report. When Johnny Scout writes his report the only people reading it are the Scouting Director and maybe the GM if need be. These scouts aren’t exactly national writers, but they have to be able to turn a three-hundred word thought cloud and article into a one-hundred-and-fifty word one. This is all done so the scouting director will have an almost-perfect idea of what the player is now and what he will be in the future. And of course factoring in "how?" and "why?" as well. It’s not that cut and dry but they have to be informative, considering the scouting director likely won't get a chance to see that non-touted high-schooler in a small New Mexico town (who in reality ended up being Matt Moore) or that Wyoming farmboy who lives in the middle of nowhere.

So when Johnny Scout goes home and files reports on all fourteen players (a majority of them are non-prospects) he has to be brief and quick to the point. He files the reports to his parent scouting director who has absolutely no time to dilly dally. Furthermore, a scouting director couldn't care less if Player A likes to eat chicken nuggets in the clubhouse prior the start of the game. He wants an informative, brief eight-to-ten line summary on the reported player. That summary is almost always followed by a visual of the players' current tool grades in comparison to his future ones in addition to an OFP (overall future potential) grade.

In the St. Louis Cardinals scouting department sits a man by the name of Deric McKamey. McKamey used to be a prospect writer, and quite a good one at that. He had this to say about how players are graded by scouts:

Scouts grade players based on a 20-to-80 scale (or 2-8) scale, with 80 representing the highest achievable grade. The grade of 50 is considered major league average. Position players are graded in five categories (hitting, power, speed, throwing, and fielding), which are typically referred to as the "five tools." Players will also receive grades for baserunning, arm accuracy, baseball instinct, and aggressiveness, though they do not account as much for the final grade.

An amateur player or minor league player will receive two grades for each tool: a present grade and a future grade, based on how they are expected to perform in the majors. Future grades are added and then divided by the number of grades to determine their Overall Future Potential (OFP). A scout can then adjust a player’s OFP by 10 points based on the lesser categories and their gut instinct.

While the aforementioned narrative is completely accurate, and quite informative as well, there is one part that stands unclear for me. I recited this quote to a scout telling him that when I wrote my first scouting report on Athletics prospect Aaron Shipman, he graded out to a 56 OFP. I irresponsibly upgraded one point on Shipman’s adjusted OFP based on gut instinct. The scout (not named Johnny, mind you) told me that my decision to do so wasn’t that big of a deal. But he also told me something that does not appear in McKamey’s quote.

He said that on the computer program in which he compiles his scouting reports, Adjusted OFP is created automatically (within the program) based on the players position and tool grades. For example, since first base is a power position, a solid hitting yet powerless first-baseman will likely have a much lower adjusted OFP than a right-fielder with the exact same tool grades. Continuing, center-field, where Shipman plays, is a speed and defense position. If a center-fielder has plus power but really slow feet and bad reads on fly balls not only will his Adjusted OFP come out several points lower than his OFP but he likely isn’t a center-fielder. Jim Edmonds, for example, who played center field for his entire career profiles as the rare slow center fielder (towards his later years), considering he was still playing the position in his 40’s.

Below are platform and base grades that I compiled with a scout’s approval that I use when grading out a players tools. The first chart is in regards to the players Adjusted OFP. It should be rather self-explanatory. The second is what each tool translates to. Keep in mind, when scouts compile these they don’t always add notes next to each tool grade. They could, but often include them in the summary. I decided to use Yankees prospect Mason Williams as an example here, considering he's a personal favorite and someone who I've had a chance to see play a quite a bit this season. 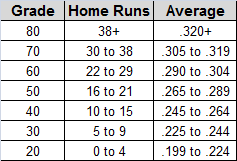 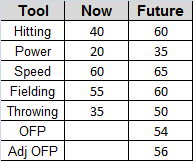 Williams is having a fantastic year in Staten Island. When I see a prospect I initially like as much as I did Williams, before going about my opinions I’ll usually check with a prospect writer or scout. Some use a tactic, which I really like, in which they don’t read any reports on the player they are expected to see prior to actually seeing him. The reason is because they're intent on gathering their own reports first and then read Goldstein or Callis’ write-up after just to find comparisons within their own notes and the writer’s. I don’t usually do that, as I like to have an idea of the player beforehand, but I’m always sure to compare notes with a scout before giving him my initial thoughts.

If you look at the grades I listed for Williams, you’ll notice I adjusted his OFP up by two points. I don’t have the fancy gizmo machine that most scouts use but I’ve seen Williams get enough plus, instinctive reads on fly balls to know that his range and defense is above average and may even get better. He also has wheels that will likely be utilized more appropriately as he gets better. Not only can he stick in center field, but he plays the position well and can hit. Some scouts could have differing opinions and might possibly have gone down a grade or two on Williams, which is certainly fine as well.

If you’ve ever attended a cooking class, you’ll know before eating your work of art you obviously have to cook it and do all necessary preparations. At times, cooking instructors bore you to death with their ongoing instructions, which is why I’m going to present my work of art rather than continue to bore you to tears with everything I’ve been saying.

Here's what a professional scouting report should look like...

And then the summary...

Williams has all the tools to be a solid, everyday player. He has an aggressive approach at the plate but makes excellent contact. He’s extremely athletic and features lots of physical projection, which could help him develop more power in the long run. Williams has good baseball instincts, which generally show on his reads and quick jumps on fly balls. In addition, his range is above average and I can’t imagine he’ll need to move to a corner. His speed might be his best tool. He shows it on the basepaths and in the outfield. He makes silly mistakes at times but nothing that some coaching can’t fix. Williams is advanced for a 20-year old in the New York Penn League, and I expect him to continue his translation of skills to assets.

Obviously, in the age of sabermetrics, a professional scouting report like this won't be enough to fully capture the skillset and potential of a prospect. But these are where every General Manager in the game looks first. From the eyeballs of Johnny Scout to a menu of scouting reports in Bobby GM's eyes, the step-by-step process, that be scouting is valued so highly in some organizations. I'm not in liberty to mention the team who boasts the most scouts in baseball, but I can definitely say that their focus on scouting and player development is like no other. These artists, or scouts if you will all have their organization's trust in painting a perfect picture when compiling a scouting report.

All of the information I used in this piece has been approved by a scout, prospect writer, or another employee of a major league organization.