If the Season Ended Yesterday: Yankees Over Phillies

Share All sharing options for: If the Season Ended Yesterday: Yankees Over Phillies 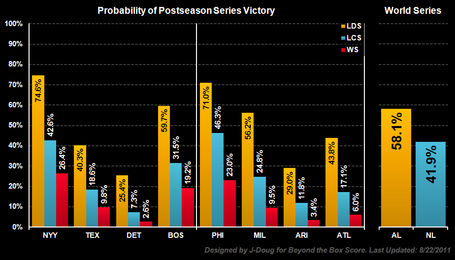 If the playoffs started today, the Yankees, Red Sox, Phillies and Brewers would advance, and the Yanks would eventually defeat the Phils in a 2009 redux of the Fall Classic. So says our Log5 postseason simulator based on estimates of true talent by Baseball Prospectus and FanGraphs.

Of course, you don't need a simulator to tell you that a World Series match-up between the winningest teams in their respective leagues is the most likely individual outcome. More interesting is what the simulator tells us about the runners up and home field advantage. More analysis after the jump.

Methodology: Our simulator predicts the outcome of every possible single-game match-up in every potential five- and seven-game series match-up between the eight teams currently in line for a playoff berth. We use the Log5 method, adjusting each number to reflect a 0.540 home field advantage (based on Matt Swartz's findings). The simulator does not adjust for roster discrepancies, pitching rotations, or any stadium-specific home field advantages that may or may not exist.