Share All sharing options for: Comparing Active Pitchers to the .300 BABIP Standard

Imagine an alternate universe in which every pitcher allows exactly a .300 batting average on balls in play (BABIP). Then compare that universe to this one. Which pitchers have gained the most from existing in our universe rather than this other, more communistic universe?

I found 7 active pitchers who had allowed at least 100 fewer hits over the course of their careers compared to the .300 BABIP standard: 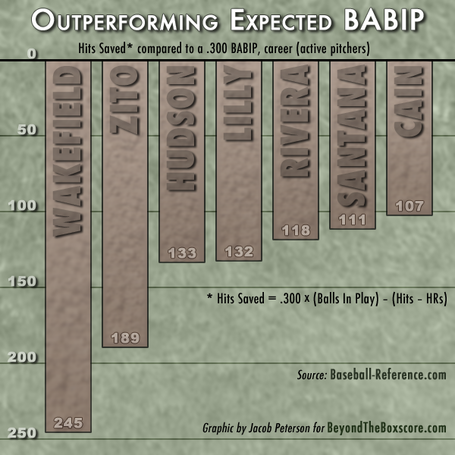 Tim Wakefield should be no surprise at the top of the list; he's pitched forever, and knuckleballers are the most well-documented exception to the .300 BABIP rule.

Perhaps the most impressive pitcher on the list is Mariano Rivera, who has pitched many fewer innings than the guys ahead of him. Over his career, he's allowed 12% fewer hits on balls in play than one would expect based on a .300 BABIP, easily the highest percentage of any active pitcher with at least 1000 IP. Second on that percentage list is Matt Cain, with 10% fewer hits in play.

In case you are curious, the active leader on the other end of the spectrum is Livan Hernandez, who has allowed 108 more hits in his career than one would expect based on a .300 BABIP. Close on Livan's heels is Zach Duke, who has allowed 101 more hits than expected (despite pitching one-third of Livan's innings) thanks to an astronomical .329 BABIP.