Examining the Deliberate Pace of the Yanks and Red Sox

Share All sharing options for: Examining the Deliberate Pace of the Yanks and Red Sox 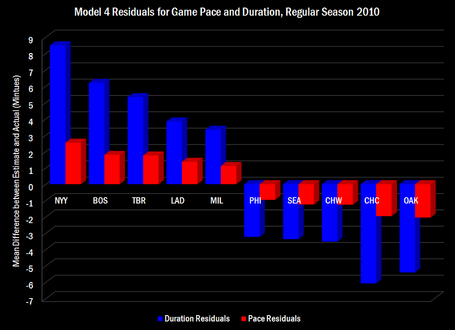 In my last post, I presented to you a model that attempts to explain the variance in game duration and pace. Before that, I presented the data showing that, as expected, the Yankees and Red Sox top the list of the league's slowest teams.

In a way, it makes sense that those two teams would perennially top the list of the slowest paced teams in baseball. Both teams score a lot, frequently reach the playoffs and play important games (which I found to take longer than trivial games), and--perhaps most importantly--play each other quite a bit.

But if the Yanks and Sox simply played a slower game because they produce more, then my models should predict game duration and pace as well for those two teams as it does for all the others. As it turns out, this is not the case.

Even when you control for variables included in my models, Yankees games are still 8:30 (8 min. 30 sec.) longer than they "should" be, Red Sox games 6:00 longer, while Cubs and As matches are about six minutes shorter than expected. These are the numbers that the residual chart plots above (click to embiggen for optimal cromulence).

So why the discrepancy? Hard to say, really.

Surely the Red Sox and Yankees play more games on national television, and thus take longer commercial breaks, than most teams. Adding an extra ad to every half-inning break should extend the typical contest by about nine minutes. However, this shouldn't account for more than about 15% of the regular season (and could account for at most ~30%).

*Models applied are pace model #4 and duration model #4 from the post cited above.

Most likely, I'm omitting an important variable (or several). Moreover, it's possible there are some interactions and non-linear relationships I'm unaware of. But it is also possible that this is a team quality; thanks to Lucas, we believe it's also a pitcher quality.

So I'm putting this out there for you all: why are the Yanks and Sox taking longer than everyone else?