Is Cliff Lee a Volatile Pitcher?

Share All sharing options for: Is Cliff Lee a Volatile Pitcher?

I must admit that I have a weakness for sports talk radio. I typically listen to podcasts while driving, but they can be finite and in order to get my sports fix I end up with no choice but to tune it. I live and work in the Philadelphia area, so I generally listen to ESPN Radio (97.5).

The other day the comment was made that Cliff Lee was a more inconsistent pitcher, and therefore the commentator had less confidence in Lee in the postseason than, say, Roy Halladay. The gist of the argument was that Lee has generally had wild swings in performance by month. One month, he’s incredibly dominant and the next he can look very human.

Think about this season. In June, Lee had an ERA of 0.21. He then had a mediocre July by ERA standards (4.91) before two dominant starts in August where he hasn’t surrendered a run.

So is this true? Does Lee’s performance fluctuate more wildly than, say, Roy Halladay? 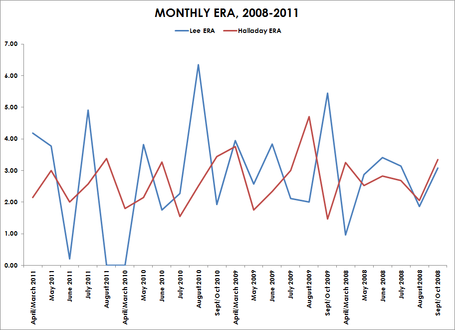 Eye-balling the monthly ERA data it does appear that while both pitchers are very good, Halladay's performance is less volatile than Lee's. Lee does have greater positive peaks, but he also higher negative spikes in ERA than Halladay.

But ERA of course has it's own issues in that it doesn't necessarily isolate a pitcher's performance and those things they have more direct control over.

Let's look at both pitcher's strikeout to walk ratios over the same time frame. 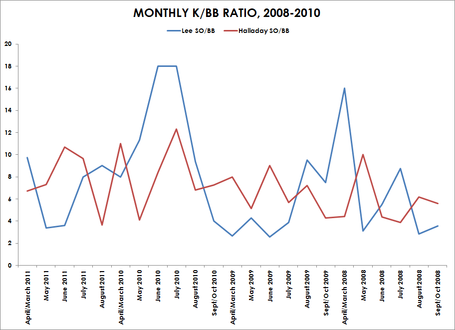 Essentially, we see the same pattern. Lee shows greater positive peaks in terms of K/BB, but he also shows lower valleys than Halladay.

Now, we are only looking at two measures, but initially it seems that Lee is more volatile than Halladay. However, that doesn't mean Lee is a volatile pitcher in general. We'd have to look at a larger sample of pitchers to determine this. (There is also the question of whether or not chunking up these stats by months is meaningful or just arbitrary).

So, sure, Lee might be more volatile than Halladay--but we are talking about Roy Halladay. Rather than compare Lee to Halladay we should revel in the consistent excellence that is Roy Halladay.

If you have the luxury of having both on your staff come October, Lee's volatility isn't something you really need to worry about.