Hurt (and Helped) by the Defense

Share All sharing options for: Hurt (and Helped) by the Defense 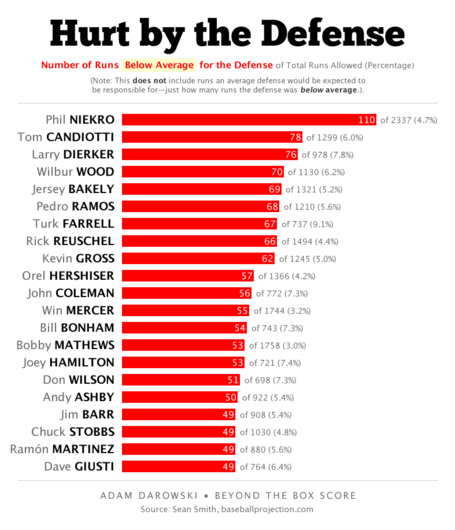 — My brother, on Bert Blyleven

I thought this quote from my brother was interesting. Now, he's a smart guy. He's been debating Hall of Fame cases longer than I have. He's starting to develop an interest in this new-fangled "WAR thing". What struck me about this quote was not that he misses how valuable Bert Blyleven was. It's the comparison between the other pitchers. Specifically, it's the Phil Niekro part.

You see, Phil Niekro is the owner of a rather incredible 96.8 WAR total. That ties him for 8th all time (among pitchers). He has the same total as Greg Maddux. Only Cy Young, Roger Clemens, Walter Johnson, Tom Seaver, Pete Alexander, Kid Nichols, and Lefty Grove rate ahead of Niekro. Missing from that list is Steve Carlton. Mr. Carlton sits at 17th all time with 84.4 WAR.

So, why did my brother (and, to my knowledge, the rest of the world) consider Steve Carlton a more valuable player than Phil Niekro?

With the exception of the strikeout numbers, they actually look remarkably similar. Carlton looks better in wins and winning percentage. The mainstream baseball world is finally realizing that those are team stats that the pitcher doesn't have a ton of control over. Carlton's ERA is a bit lower, but the ERA+ figures are the same. What saberists have taught me over the past two years, however, is that ERA is very much a team stat as well (though not to the same extent). Niekro also allowed more hits than Carlton, but we're about to see that he has a pretty good excuse for that.

Phil Niekro played for some awful teams. Steve Carlton is famous for winning 27 games for a last place team, but he actually pitched in the LCS five times and in the World Series four times. Niekro, on the other hand, made two postseason (LCS) starts in his entire career. Both Niekro and Carlton picked up quite a few tough losses. Both pitchers, however, received average run support over the course of their careers. In fact, the both had a bit more support than the league average (Carlton with 4.3 and Niekro with 4.2 runs per 27 outs, compared to the league average of 4.1).

So, where's the big difference? Well, it really has nothing to do with Niekro or Carlton. It's the defense.

Steve Carlton's defenses were collectively worth four runs above average. Over the course of a long career, that's a fancy way of saying "average". No other pitcher in history, however, allowed more runs due to a bad defense behind him than Phil Niekro. His defenses were worth a total of 110 runs below average. That's a 114 run (or 11.4 win) swing. That, right there, is your difference.

Had Phil Niekro played in front of the same defense that Steve Carlton did (with the same ER/R percentage), his 3.35 ERA would have looked more like 3.25. His ERA+ would have been closer to 119 than his 115. These don't look like huge adjustments, but if you spread them out over 5404 innings, that's some significant value. Given that Carlton's ERA+ is still 115, the WAR gap between the two starts to make sense.

It's not just the "firefaller" vs. "flutterballer" prejudice that skews our view of the value of these pitchers. The difference in the defense is tough to see. Some of it is reflected in ERA—86.1% of Niekro's runs allowed were earned to Carlton's 87.5%. Of course, unearned runs only occur as the result of an error. We all know that not all bad defense involves an error.

On the flipside, here are the pitchers who were helped the most by their defense: 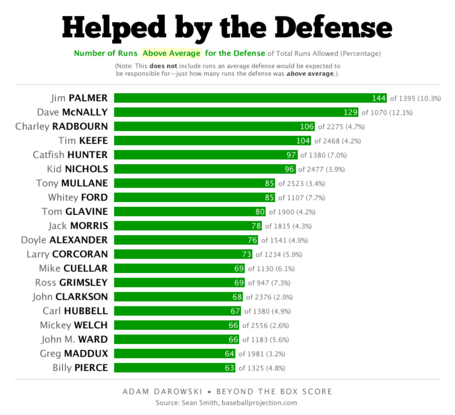 There's a lot to take from this graphic, and my feelings about it can best be summed up in a bulleted list:

For me, this was a valuable reminder that it's not just wins and winning percentage that should be attributed to the rest of the team. ERA and ERA+ is also subject to the same (albeit less severe) limitations.