Making the Most of Their Hacks in 2011

Share All sharing options for: Making the Most of Their Hacks in 2011 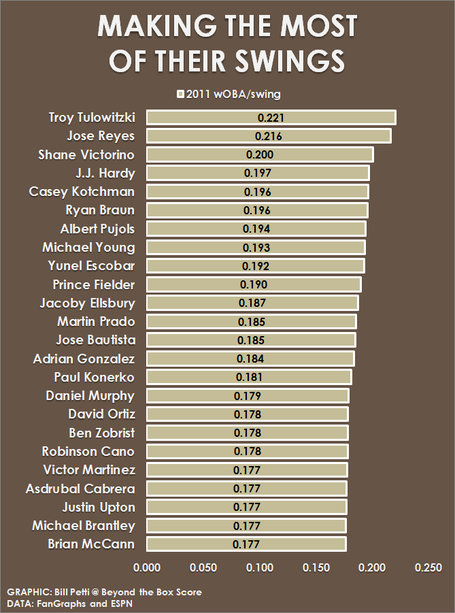 Plate discipline is about more than just walks. It's also about knowing what pitches a hitter can handle and identifying those pitches during an at bat. A hitter with a high swing percentage isn't necessarily a bad hitter. It all depends on how much damage they do when they choose to swing.

To look at this I decided to calculate the Weighted On-base Average of all qualified hitters in 2011 per swing. wOBA here was calculated using 2010 coefficients and only includes batted balls--so singles, doubles, triples, and home runs. For each qualified hitter I calculated the number of swings and used that as the denominator for wOBA instead of plate appearances.

The graphic above shows the top 25 hitters in baseball in terms of the wOBA generated per swing of the bat. For reference, league average so far this year is .155.

Amazingly, Jose Bautista is not at the top of this list. That honor goes to Troy Tulowitski, who continues to show how valuable and productive a player he is. Jose Reyes and Shane Victorino might surprise some people as the only other players with >=.200 wOBA/swing. Yes, most folks understand that these players are having great years, but they don't fit the profile of what most think about when they think of "bang for your buck" types of hitters (e.g. big, strong sluggers).

Some other surprises include the Rays' Casey Kotchman, whose managed a huge turnaround from a year ago when his BABIP was in the tank. His BABIP has swung pretty far in the other direction, and his wOBA/swing certainly reflects that.

Yunel Escobar's reemergence this year with the Blue Jays has led to a .192 wOBA/swing. He's decreased his swing percentage by roughly 5% and his doing even more damage than in the past when he finally takes the bat off his shoulder.

Who are the least efficient hitters with their swings? 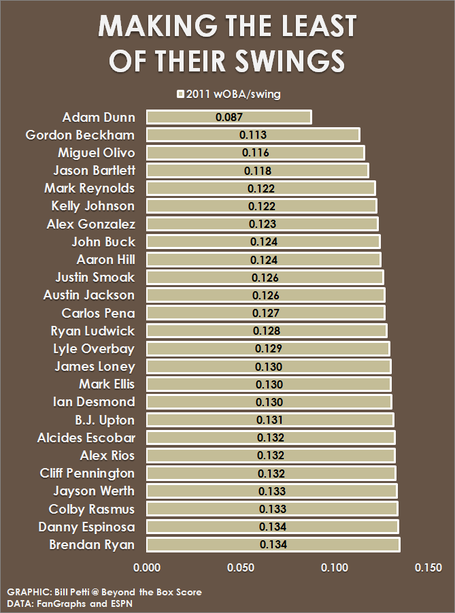 Adam Dunn (.087) and Gordon Beckham (.113) have combined for 808 plate appearances and over 1500 swings this season and have average roughly .100 wOBA/swing. With this lack of production, is it any wonder the White Sox scoring is 10% less than league average?

Nationals fans can't bee too happy, or surprised, to see Jayson Werth near the bottom of the list. Despite his massive contract he's only managing .133 wOBA/swing this season. Werth's swing percentage is pretty much right on his career average, so it isn't as if he's swinging at everything. Now, the quality of those swings is another story.

But wait a minute? Couldn't it just be that those that swing less have higher wOBA/swing? It's a good question. But a quick correlation between swing percentage and wOBA /swing shows only a -.30 relationship. That amounts to a .09 R2. So, sure, to some extent more disciplined hitters might be generally considered better hitters, but not in all cases.

Like I said at the outset, plate discipline is about more than just laying off pitches. It's about knowing what pitches you handle well and identifying those pitches equally well.