Reliever Platooning: It's Not Just For Lefties Anymore

Share All sharing options for: Reliever Platooning: It's Not Just For Lefties Anymore

When it comes to relief pitchers, we have become accustomed to seeing left-handed specialists, whose job is often to get out one or two tough left-handed hitters. Increasingly, though, this tendency to utilize platoon advantages has spread to right-handed relievers, particularly non-closers. 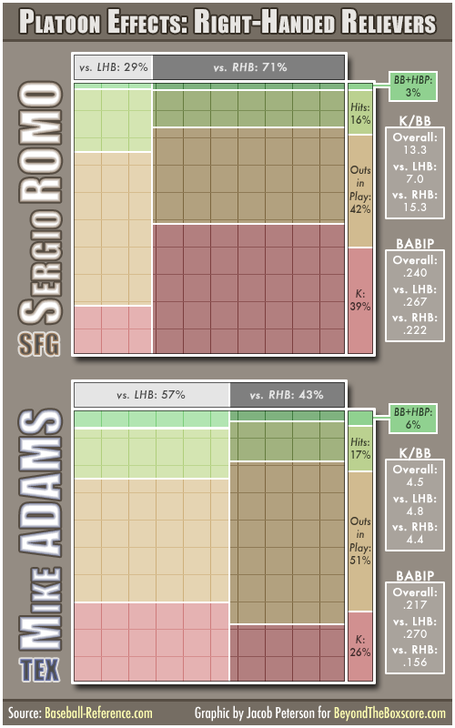 In the graphic above, each grid line represents 10% of the PAs that a pitcher has been involved in (so each box represents 1% of the player's total PAs). The PAs are broken down by platoon split and by result: strikeouts, other outs, hits (including errors), and walks (plus hit-by-pitches). All stats are through the games of 8/11/2011.

Notice that both pitchers have been very effective regardless of the batter's handedness, though there are some obvious platoon effects at work. Adams and Romo would be quality relievers regardless of how managers use them.

Still, it's easy to see why Giants manager Bruce Bochy has used Romo the way he has. While Romo basically never walks anyone, his strikeout rate against right-handed batters is insane: 48%. In other words, nearly half of righty batters strike out against Romo.

Romo's extreme 71% platoon rate is tied (with Nelson Figueroa) for the highest in baseball among right-handed pitchers (and second to lefty Randy Choate overall). Put those two stats together and you get an overall strikeout percentage of 39%, behind only to Craig Kimbrel among qualified relievers. Not to mention that ridiculous K/BB ratio of more than 13.

Romo has been no slouch against lefties, striking them out at a decent 18% clip while issuing only 1 walk (in 39 PA), but he's been Superman against righties. It should be noted, though, that aside from strikeout rate, his career numbers are almost identical against righties and lefties, thanks to a lower BABIP vs. RHBs.

By contrast, Adams doesn't have a large performance gap in his platoon splits. He has above-average strikeout rates and below-average walk rates against both lefties and righties. He strikes out lefties more often, but gives up fewer hits to righties (though that .156 BABIP against RHBs cannot possibly be sustainable).

Perhaps Adams' managers have picked up on his ability to strike out lefties (an excellent 29% K rate this year), because they have used him 57% of the time against left-handed batters. That's compared to the MLB average of 44% of all PAs by lefties. Adams actually is used against lefties more often than all but a few left-handed relievers:

In his career, Adams has been used almost exactly half the time against lefty hitters, and has done very slightly better against them than against righties. Given that most right-handed pitchers do a bit worse against right-handed batters, it's no surprise that Adams would get more play in that situation that normal, especially since the most prominent lefty in the Padres' bullpen this year has been a rookie from Australia (Josh Spence).

In Adams' short time with the Rangers, he's been asked to face more than twice as many lefties as righties (20 LHBs, 9 RHBs). The Rangers also have a true lefty specialist (Darren Oliver), though, so perhaps that trend will not hold up. Regardless, Adams should be a nice addition to the Rangers' chances of winning the AL West.