Share All sharing options for: Is Volatility an Attribute? Player Volatility Part IV 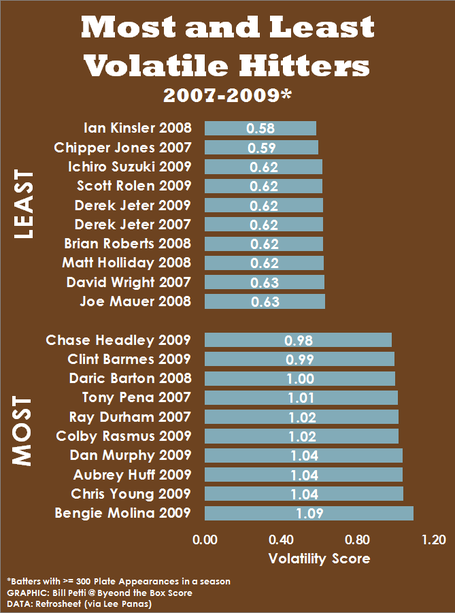 When I began writing for Beyond the Box Score I started off by exploring the idea of hitter volatility. The idea was inspired by David Wright and the talk over the past few years that he was a streaky hitter.

To test this idea I came up with a measurement of Volatility. I looked at a hitter's 10-game moving Weighted On-Base Average (wOBA) and the standard deviation of those 10-game averages over the course of a season. The idea was to find out which hitters performed most consistently, game to game. Lee Panas offered a great bit of advice and I've since moved to the coefficient of variation as the basis for Volatility to ensure that better hitters are not penalized for their positive outlier performances.

Lee was kind enough to provide me with game log data for every player during the 2007, 2008, and 2009 seasons. Our own Jeff Zimmerman  was a big help in setting up and analyzing the data, allowing me to calculate Volatility for each player over those three years.

The graphic above shows the 10 most and least Volatile hitters from 2007-2009 for all hitters with >= 300 plate appearances (lower scores indicate less Volatility).

The multi-year data was important in that it allowed me to preliminarily test whether Volatility is a player attribute or simply the result of randomness year to year, player to player.

So what's the verdict?

Suggestive, but not conclusive.

In order to determine if Volatility is an attribute I looked at a hitter's Volatility score in Year 1 and correlated it to their Volatility score the following hear. Since I had three years worth of data I was able to look at correlations over a number of seasons.

The table above shows the R and R2 for the entire sample (1075 hitters) and for hitters with >= 300 Plate Appearances (530). For all hitters, the R is .60. However, the more restrictive criteria (which filters out a large number of NL pitchers) provides an R of only .52.

So the question is whether these correlations are strong enough to say that Volatility isn't simply the effect of random fluctuations, but an attribute--a component of a hitters true talent much like power or plate discipline.

On the one hand I am hesitant to say it's an attribute given the R of only .52 on the restricted criteria. However, an R of .52 is nothing to sneeze at. Also, a preliminary analysis shows that Volatility is correlated to things such as K (negative) and BB (positive) rate, Isolated Power (positive), and BABIP (positive).

Now, BABIP can itself be volatile season to season, but we do know that some batters exhibit higher BABIPs over the course of their career than others (e.g. Derek Jeter, who shows up twice in the top 10 over three years). And if higher BABIP is related to lower Volatility, there may be something to this afterall. Volatility isn't so much an attribute as an observable implication of hitters with a certain mix of talents/attributes.

Either way, if Volatility has any kind of consistency it's a useful metric. One case would be fantasy leagues where you are choosing between two hitters, both with similar year end stats/projections. The less Volatile player will be more valuable in weekly, head-to-head play since it matters when batters put up their numbers. Also, as I suggested in earlier parts of the study, General Managers may want to consider the Volatility of players when making free-agent and other roster decisions given the greater consistency of certain players over others.

As always, suggestions and comments are welcome.

I want to give a special thank you to Lee Panas for his suggestions on the analysis and for sharing the game log data. Also, a big thank you to Jeff Zimmerman for helping me crunch the data.