Share All sharing options for: 2012 Positional Free Agents Set to Make Some Coin 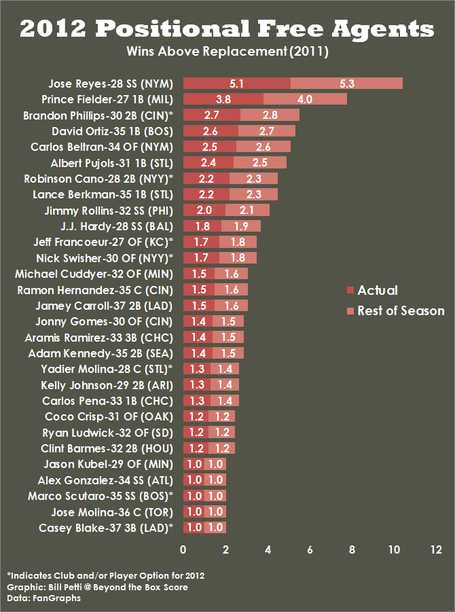 A lot can happen between now and September, but as we reach the half-way mark of the season and the trading deadline it's worthwhile to check in on some of the potential* free agents in 2012 and how they are helping (or hurting) their cause.

The graphic above shows the top 29 position free-agents to be in terms of their Wins Above Replacement earned to date as well as their projected overall for 2011**.

**The projection is back of the envelope. It takes the WAR per game to date and scales it to the rest of the season. Again, nothing fancy.

Hmmm, that Reyes guy seems to be having a decent season. Not only that, but he plays a premium defensive position and is all of 28 years-old. Oh, and look, there is a 27 year-old, power hitting first basemen set to enter the market and he's on pace for a close to 8 WAR season.

Not that it's any easier in any other season, but the top free agents to be (in particular the top two) will provide GM's with an interesting decision.

First, Jose Reyes. Reyes is having a flat out phenomenal year, but it comes on the heals of two sub-par seasons that were mostly the result of injuries. That being said, he's only 28 years old, still plays an above average shortstop, and there is evidence that his performance at the plate is not only in line with his previous all-world 2006-2008, but maybe even improved. The injury issue has been blown somewhat out of proportion, but an ultra risk averse GM may steer clear. In the end, will he get Carl Crawford money? Before this latest hamstring issue I would have said I couldn't imagine some team not offering him at least $100M. But if this proves to be just some a short-term issue I'd think he'll still be the darling of next year's free-agent market.

Then there is Prince Fielder. Fielder has been one of the most dangerous and balanced hitters (in terms of using the whole field) over the past few years. Since his first full season in the bigs (2006), Fielder ranks 7th in terms of fWAR for first basemen. In terms of wOBA, he ranks 4th.

The closest two comparisons to Fielder in terms of power hitting first basemen set to sign a long term deal are Mark Teixeira and Ryan Howard. At age 30, Teixeira signed an 8-year/$180M deal with the Yankees after the 2008 season. Howard never hit the open market, signing a 5-year/$125M extension with the Phillies that doesn't kick in until next year. Both players have played worse (but not horribly) since signing those deals, with Howard declining a bit faster. Fielder is only 27, but the "bad body" label and the fact that he is pretty one-dimensional as a player could depress the market for him. That and the fact that another first basemen will also be on the market, and his last name is Pujols.

Finally, there are a pair of second basemen that could hit the market, but I don't know how likely it is. Both Brandon Phillips and Robinson Cano have option years in 2012.

Phillips, 30, could remain with the Reds next year as the club holds a $12M option with a $1M buy-out. Phillips has said he wants a long-term deal, but the Reds don't seem to be (or need to be) in a hurry to move on that.

As for Cano, 28, the Yankees hold a $14M club option for 2012 and a $15M option for 2013 with a $2M buy-out for both years. The Yankees have never been one to move a player for salary reasons, and Cano has emerged as one of the best hitting second basemen in league. True, his defense is poor, but he's been such a good hitter and the Yankees tend to lead with their offense.

Since 2008, Phillips and Cano have been almost identical in terms of fWAR (13.8 and 13.6 respectively) and rank 6th and 7th among second basemen league-wide. According to FanGraphs, both players have provided roughly $13M-15M of value per year to their clubs over that time.

That tells me two things: 1) if they were to hit the open market, they both have a shot at garnering a significant, multi-year deal; and 2) Given the price of their respective options--and the fact that both clubs are contenders--it's highly unlikely either one will hit the market until 2013 at the earliest.