On Charlie Furbush, Particularly His Slider

Share All sharing options for: On Charlie Furbush, Particularly His Slider

As part of a pitching shuffle that also includes sending the ineffective Phil Coke to the bullpen, the Tigers will give rookie Charlie Furbush a shot in the rotation.  Furbush will make his first big league start today after spending the past five weeks in the Tigers' bullpen.  Looking into what he'll bring to the table ...

As a minor league starter, Furbush was effective.  In his four years in the Tigers' system, he put up a 3.69 ERA with a K/9 of nine and a half and a K/BB of four over 378 1/3 innings (all but three of his 71 appearances were starts).  He gave up a few more home runs than ideal - about one per nine innings - due to a below average groundball rate.  So, what has this minor league starting track record done for Charlie in the major-league pen?  Over his first 21 2/3 innings, his walks are up, his strikeouts are down, pushing his K/BB to just under 2.  Also, he's already yielded three home runs.  This adds up to a poor 4.70 FIP, though based on the number of flyballs he has allowed, we could expect that number to be about half a run lower.  It's also worth noting that despite that subpar peripherals, Furbush has only allowed six runs to this point.

After the jump, let's move onto Furbush's style and arsenal.

As you can see in the embedded video above, Furbush slings it from a low 3/4 angle.  He also has high socks, which is cool.  Furbush has thrown five different kinds of pitches in his big-league career covered by PITCHf/x: a low-90s four-seam fastball with some natural armside run on it due to his low arm angle, a rare sinking two-seam fastball, a slider in the low 80s, a curve in the 70s, and a changeup that he reserves for righties that he'll throw about 8 mph off of his fastball.  For the most part, he's been fastball/slider out of the 'pen, as those two pitches have accounted for three-quarters of his offerings (about two fastballs for every one slider).  On a per swing rate, his fastball generates whiffs at 25% (spectacular compared to the league average for fastballs) and his slider at 29% (a bit below the league average).  His fastball is fairly typical, but his slider is what makes him kinda funky.  To the spin deflection charts: the first shows horizontal spin deflection versus vertical spin deflection for Furbush's slider. 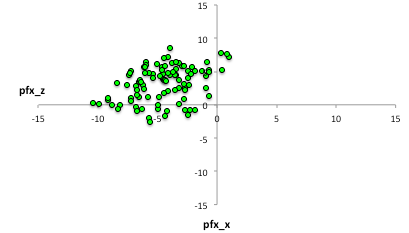 There are a few different looks to the pitch (we'll get into this more later), but for the most part, it sweeps a lot and doesn't sink much.  Aggregated over Furbush's 98 sliders, the velocity is 81.2 mph, with 4.5 inches of cut into a right-handed batter and 3.2 inches of vertical "rise" relative to a theoretical spinless pitch.  For this to make more sense, the average lefty slider is 81.6 mph, with 1.7 inches of cut and 0.7 inches of rise.  So Furbush's velocity on the pitch is about average, but he's getting a lot more cut and rise than the typical slider.  Cut and rise is an interesting combination - typically, pitches with a lot of glove-side movement also drop a lot (curveballs and big sliders).  Breaking pitches that don't drop a whole lot, like cutters, are usually accompanied by less horizontal movement.  A guy like Furbush, with his low arm angle, is more likely to throw these "sideways" pitches due to the way the ball is released out of the hand.  With all of that being said, it looks like Furbush is getting more drop on his slider than he was earlier in the year.  This next chart shows vertical spin deflection plotted against time. 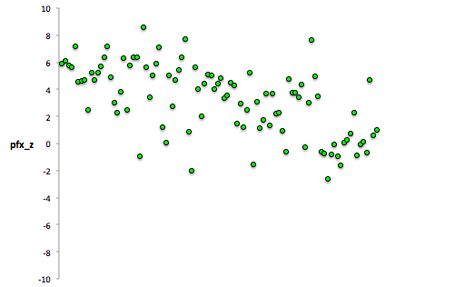 The added movement hasn't helped Furbush miss bats with the pitch; hitters have made contact on all swings on Furbush's slider since June 10th.

What about plate location?  There are some hangers, but plenty of "good" misses as well.  In keeping with the lateral action of the slider, most of the misses are wide as opposed to low. 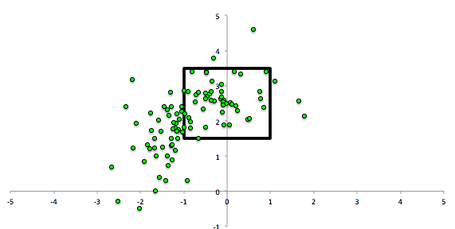 None of us, obviously, have any clue what to expect from Furbush in the rotation. Two things I'm skeptical of: while Furbush's fastball looks pretty good now, it remains to be seen whether or not it can sustain its effectiveness over the length of a start (a decrease in velocity, which is common for pitchers moving from the bullpen to the rotation, might play a big role in this).  Another thing is that funky slider.  If it looks more like the horizontal breaker that we saw earlier in the year as opposed the pitch with two-plane break that's appeared over the past few weeks, it could become very prone to flattening out up in the zone.