Which Ubaldo Jimenez did the Indians Acquire?

Share All sharing options for: Which Ubaldo Jimenez did the Indians Acquire?

Contra to just about all speculation over the past few weeks, the Cleveland Indians landed pitcher Ubaldo Jimenez from the Colorado Rockies.

Jimenez is having a very un-Jimenez-like season so far this year. His ERA is almost a full run higher than his career average (in a run environment that is one of the lowest in roughly a decade). However, whether that ERA is the result of a declining Jimenez or factors outside of his control is something one has to dig into.

So does this mean that the real Ubaldo has been here all along and is now headed to Cleveland?

I'm not so sure about that.

The biggest factor driving Jimenez's stats in the wrong direction this year is his batting average on balls in play (BABIP). That currently stands at .312 and is well above his 2010 performance (.271) and his career norm (.284). But that isn't just the result of bad luck.

Jimenez is giving up line drives at a career-high rate of 20.9%. Besides being 4% higher than last year, that rate is 16th worse among starters in the lighter-hitting National League. He's also getting batters to pop-up at roughly half his career rate (4.5% vs. 9.3%).

Jimenez is also giving up more home runs per fly ball than he has in almost four years (8.9%). It's not a terrible rate, but add that to the bad change in line drive percent and pop-ups and he suggests he's getting hit much harder this year than in the past.

A quick look at some pitch data suggests the culprit is Jimenez's historical strength--his fastball. So far this year, Jimenez is throwing his fastball about 2 mph slower than normal (93.9 vs. 95.6). His runs above average on that pitch last year was 30. This year? .7. Combine that with the fact that hitters are making more contact both in and outside of the zone on Ubaldo and it's not surprising that his BABIP and HR/FB stand where they do.

Ah, but Jimenez had a terrible March/April this year that might be skewing our view of the flame thrower. What happens when we look at some trending of his stats since March/April of 2010? 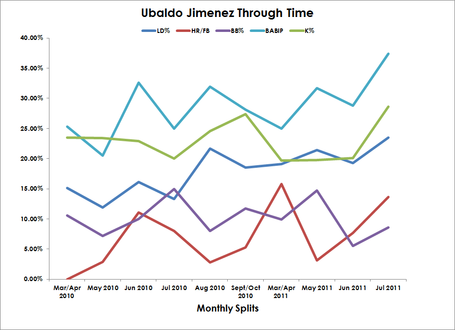 The view doesn't get much better.

I didn't include trend lines for readability purposes, but basically only one of those peripherals is moving in the right direction. Jimenez has been cutting down on his walks since the start of last year, but his strikeouts are actually flat to decreasing, he's giving up more HR/FB, and his line drive percentage has jumped since last August leading to his higher BABIP.

But here's some good news: The Indians don't play in Colorado.

Yes, Jimenez is moving to the more offensively potent AL, but his away splits are significantly better than his home splits (and that includes a 3% difference in LD%). Progressive field is above league average in terms of park factors, but teams score almost .4 runs per game less there. The only catch is that the park plays better for home runs than Colorado, but overall the new home digs should help Jimenez regain his form.

So Cleveland isn't getting the elite Jimenez we saw at times last year, but they are getting a very good pitcher that still knows how to strike hitters out and is decreasing the free passes. They are bringing him to a park that will play smaller than his last home and have him locked up to a very team-friendly contract for the next two years.

I don't know if it will be enough to win the AL Central this year (my money is still on the Tigers), but it should certainly make things interesting the next two years.