All Innings Are Not Created Equal: How Run-Scoring Varies By Inning

Share All sharing options for: All Innings Are Not Created Equal: How Run-Scoring Varies By Inning

I ran across this amazing fact recently: NL teams have scored over 200 more runs in the 1st inning than in the 2nd inning this season. The dropoff from the 1st to the 2nd inning isn't quite as severe in the AL--59 runs--but it is still significant. As it turns out, this is not an anomaly. For at least the past 10 years, teams (especially NL teams) have scored many more runs in the 1st than in the 2nd. 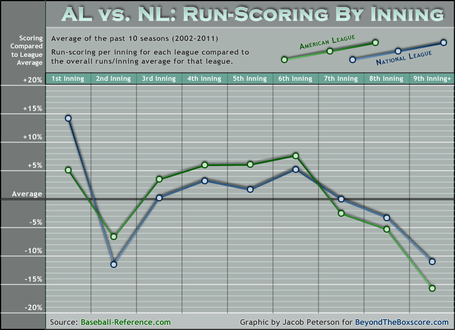 Run-scoring then increases in the middle innings, reaching a peak in the 6th, before dropping in the latter innings. Particularly in the AL, teams score drastically fewer runs per inning in the 9th than in the preceding innings.

After the jump, I present a few theories to try to explain the inning-by-inning scoring differences, as well as the disparity between the leagues.

Why Do Teams Score More Than Average In The 1st Inning?

The essence of this phenomenon, I believe, is that teams typically bat their better hitters toward the top of the lineup and their worse hitters at the bottom of the lineup. Hence, if teams have constructed their lineups properly, their top hitters will come up to the plate more often in the 1st than in any other inning.

In addition, we certainly cannot rule out the idea that there are simply more pitchers who have trouble in the first inning (I call this "Tom Glavine Syndrome") than pitchers who thrive from the get-go.

Why, then, are the NL's run totals so much higher than average in the 1st? The main difference between the leagues is of course that NL pitchers hit much more often. NL pitchers almost never hit in the 1st inning, however, and when they do, their team has already scored. So NL teams will score more than average in the first simply because they do not have weak-hitting pitchers weighing down the lineup in that inning.

That cannot explain all of the difference between the leagues, however. Why? Because NL teams have actually scored more runs per 1st inning than AL teams. That's not relative to the league averages, that's actual runs per inning:

Granted, this is not a huge difference, but it is fairly consistent in recent years. NL teams have scored more runs per 1st inning in 8 of the past 10 seasons and all of the past 6. I can't say for sure why this might be, but I'd theorize that the NL has had better "top-of-the-order" hitters in the past few seasons. Another possibility is that NL managers have constructed lineups that are more likely to score in the 1st inning.

Why Do Teams Score Less Than Average In The 2nd Inning?

As a corollary to the points made about the 1st inning, we can assume that teams will score less in the 2nd inning than average, since that is the one inning in which teams are particularly likely to send up their bottom-of-the-order hitters. After the 2nd, the lineup patterns start to break down; the later you get in the game, the less influence the lineup has (on average).

Another influencing factor is likely that pitchers do better the first time through the order. In most cases, the 2nd is the last inning in which pitchers faces only hitters he is seeing for the first time. (Of course, you'd expect this effect to also drive down scoring in the 1st inning, which it does not appear to do.)

Why Do Teams Score More Than Average In The Middle Innings?

I'd guess this is mostly just a matter of starting pitchers getting tired and hitters seeing the pitchers' offerings for the second and third times. Another theory is that relievers who come into a game in the middle innings are usually among the worst pitchers on their teams.

NL teams seem to get less of a scoring boost in these innings than their AL counterparts. Since these innings are also when pitchers do most of their hitting, this makes perfect sense.

Why Do Teams Score Less Than Average In The Late Innings?

Scoring starts to dip in the seventh inning, most likely because teams have often begun to replace their tired starters with fresh-armed, often flame-throwing relievers. In addition, the starters who are still in the game at this point are going to be better than average, since mediocre pitchers will usually get knocked out in the first 6 innings.

As you get to the 8th and especially the 9th innings, scoring drops even further, which makes sense, since the very best relievers are often used exclusively in these innings.

Why Is The Scoring Drop So Precipitous In The 9th Inning?

This is not simply a matter of better relievers. The 9th inning is a special case because the bottom half of the 9th isn't even played about half the time. Specifically, it isn't played when the home team has outscored the road team through the first 8.5 innings.

This means that the 9th-inning data has a disproportionate number of innings from 1) road teams and 2) teams that trailed through the first 8 innings. Since road teams score a bit less often than home teams and leading teams score more often than trailing teams, this imbalance lowers the scoring rate quite a bit.

How much does this skew things? Let's take this year's data from the 8th inning and treat it like the 9th inning; in other words, we'll remove all at-bats in which the home team was ahead to start the inning.

In the 8th inning this year, teams have scored 0.45 runs per half-inning. This includes the following breakdowns:

As you can see, the "at home and ahead" scenario is the best one for scoring. By removing the "home and ahead" half-innings, it lowers the average runs per half-inning from 0.45 to 0.43. Assuming a similar pattern in the 9th inning, we can expect that scoring in that inning is 3 to 4 percent lower than it would be if all half-innings were played.

That's all the theories I can come up with right now. If you have any other ideas for explaining the various differences (either between innings or between leagues), please let me know in the comments.