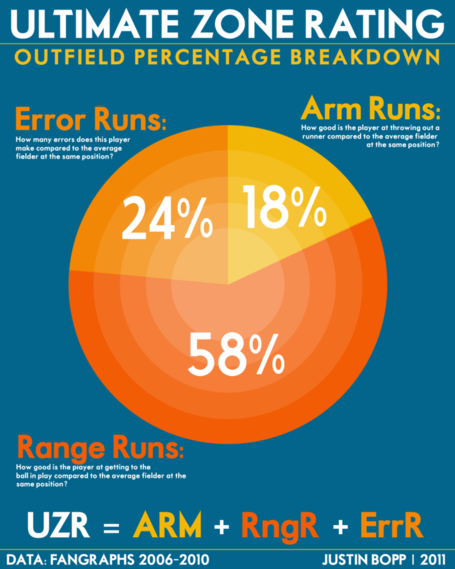 The above graphic is the follow-up to the 2006-2010 UZR Infield Components graphic I created back in April. Each of these shows the various components of Ultimate Zone Rating and what relative portion of the total each represents for the average player over the given time. Range is clearly the most important, "Arm" (the ability to throw out runners and/or prevent extra bases) is the least, while not creating errors comes in 2nd with nearly a quarter of the total value.

Assuming the sometimes scoffed-at metric takes range into account for errors (the long-acknowledged problem with errors being that fielders with greater range would make more of them, if only because they have more opportunities), the conclusion is that all other factors aside (offensive capabilities of the player in question), UZR tells us it's most important to get to the ball first, then actually catch it. Obvious? Perhaps. Tell that to the next person jumping for joy because his right-fielder has a cannon for an arm (but no range to actually use it).