The Red Sox are setting the pace in the AL East with their dynamic offense, and the Yankees are sitting pretty closely behind.  With the second best record in the league, the Yankees currently are looking pretty strong in the league's wildcard chase.

As anticipated, their pitching staff his being headed by ace CC Sabathia, who is currently leading all major league pitchers in WAR.  But the man who has arguably been their second-best starter has been a huge surprise, as he was signed purely as a depth move after not pitching in the majors at all during 2010.  Bartolo Colon has been excellent for the Yankees this year.  A big part of this is that his strikeout rate is the highest it's been since 2000 (!), and his walk rate is lower than his 13-year career average.  He's taking an unusual pitching approach this year, so looking into his PITCHf/x data can give us some more insight on what Colon is doing.

If you go to Fangraphs' pitch data leaderboards and sort by fastball percentage, you will see that Colon is at the front, with Justin Masterson close behind.  Less than17% of Colon's pitches are offspeed; he and Masterson are the only two pitchers with at least 80% fastballs.  Before we move on to the finer points of Colon's game, I think it's important to take a look at some basic attributes of the pitch types Colon uses, which include a slider and changeup in addition to all of those fastballs.  For the metrics here, you can see the league average by pitch type at this link.

(Colon might throw a few cut fastballs in games as well, but they are pretty rare.)

The two fastballs are used differently: The four-seamer is thrown harder and is used to pick up whiffs, while the two-seamer (sinker) is a command pitch that's thrown softer, with more movement, and to the corners in order to pick up umpire calls.  Even with two strikes, when most pitchers bring out the offspeed stuff, Colon sticks with his two fastballs against both lefties and righties:

The ~2 mph velocity difference between the four-seam and two-seam fastballs is about as much as you'll see from a big league pitcher (most guys have a difference of within 1 mph).  He'll also vary his fastball speed based on the game's situation*.  Consider the table below showing velocity in different ball-strike permutations.

*When runners are on base, Colon loses about 1 mph (91.2 to 90.2) from his two-seamer.  His four-seam velocity remains virtually unchanged.

Colon gets more velocity variation than the average pitcher, as you can see by comparing to the data in this March 2011 post.

Now that we've gotten some basic information on Colon's fastballs, we can look a little more closely at what's made Colon so good this year: his command.  The two-seam fastball, in particular has been huge.  Colon has picked up 36 called strike threes (21 to righties, 15 to lefties) on his two-seamer, more than any of his other pitches.  It has been well-located to the outer half: 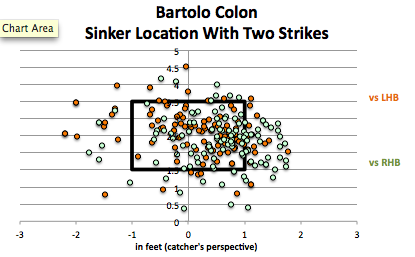 Another way to look at Colon's location is by splitting the strike zone into smaller regions and determining pitch frequency in those regions.  Opening our sample from two strikes to all pitches, you can see in the graphic below that Colon has a plan when he's pitching.  Four-seamers are almost always going to be away, which is a technique employed by many pitchers, though Colon's execution is extreme.  The two-seamer, on the other hand, has more options: Colon is willing to throw it in to righties and away to lefties, as the pitch's tailing action naturally takes it, but he's also able to sneak it over the corner, like the strike zone plot above showed.  The bars in the graph below show pitch selection within five different subsets of the strike zone: inside out of the zone, inside in the zone, middle third, outside in the zone, outside out of the zone.  It's from the catcher's perspective, so for the vs RHB graph, for example, just imagine that there's a right-handed batter to its right.  Data for Colon's fastball and sinker are shown, as are bars from the league average pitcher, with data originating from here (click to enlarge).

So, I guess the big question is: when will the Colon magic run out?  Unlike so many of the surprise breakout stars we hear about, Colon has the underlying peripherals (good strikeout, walk, and groundball rates) to back up his performance, as his 3.25 xFIP is 7th in the American League.  One potential question is whether or not he can keep his high strikeout rate with a whiff rate under 15%; even with his ability to command his two-seamer for called strikes, it would seem likely that there will be some regression given his inability to miss bats consistently.  That's certainly an open question. Right now, I see someone who's deceiving hitters with good movement and the ability to dial up speed on the fastball in strikeout counts.  At any rate, the Yankees will surely take absolutely nothing for granted with Colon, as he's exceeded absolutely every expectation in 2011.

PITCHf/x data is from MLB Advanced Media and here is courtesy of Joe Lefkowitz's tool.