Considered by many to be a frontrunner for the AL Cy Young award, Jered Weaver is having an excellent season. In 161 innings, he has posted a microscopic ERA of 1.79. Advanced metrics also rate his performance favorably, with Weaver posting a FIP 36% above league average. He succeeds through a deceptive delivery, pinpoint command, and and a varied pitching repertoire.

As good as he has been this season, he was better last year. He struck out almost 2 more batters per nine innings and performed significantly better according to metrics like xFIP, which help deal with the unsustainable 2.8% HR/FB rate that he has this year. He's finally getting the recognition he deserves, but it's a year late. As Harry Pavlidis and Tom Tango point out, he is considerably underrated by the mainstream media. But he doesn't get the love that should, even when according to sabermetric valuation methods.

Even FIP doesn't tell us how good Weaver is. This is because FIP, or fielding independent pitching, assumes that all pitchers have the same skill on preventing hits on balls in play. Of course for the vast majority of pitchers, this assumption is accurate. But every once in a while, we get a pitcher like Weaver, who has a .278 BABIP in over 1000 innings pitched, a figure well below the league average span. In this post I will take a look at how he keeps the hits off the board.

Analysis after the break: 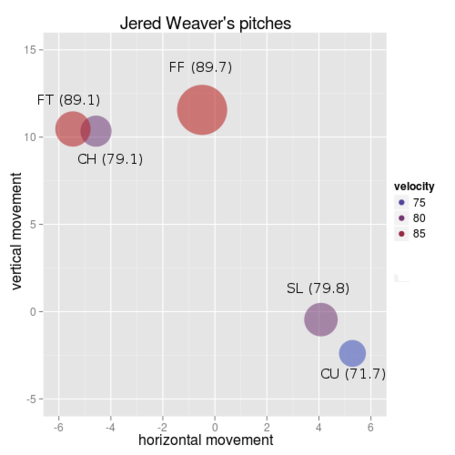 FF = four-seam, FT = two-seam, CH = changeup, SL = slider, CU = cuveball. This graph shows the movement of Weaver's pitches, also known as the spin deflection. Size of the circles indicates usage and color indicates velocity. These values are for his 2011 data and I did use MLBAM classifications because Weaver's clusters are relatively distinct. MLBAM did see a few cutters though which I changed to four-seams.

Weaver has a pretty unusual repertoire. He releases the ball at a very high arm-slot, which leads his four-seam to often act like a cutter. Also of interest is that his breaking balls get much less vertical movement than average: His curveball comes in at 71.7 mph and gets around 2-3 inches of drop compared to a ball thrown without spin. This is a very unusual combination, as the league average curveball comes in around 77 mph and gets about 5 inches of drop. Oddly, Weaver's curveball gets less movement than average despite throwing it considerably slower. It seems counter-intuitive that less movement can be good thing, but that may indeed be the case for Weaver. Less movement helps him throw his breaking balls for strikes and allows him to throw the pitches on a similar plane to his fastball. 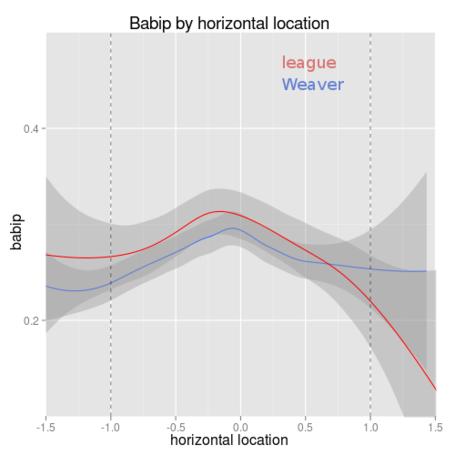 This graph shows the relationship between BABIP and horizontal location. Weaver is the blue line and the league average right handed pitcher is the red line. I used all of Weaver's data from 2008-2011 to make the sample as large as possible (n=2149 balls in play). Gray bands indicate confidence. The dotted gray lines indicate the horizontal borders of the strikezone. Left side of the graph is inside to right handed batters, and the right side of the graph is outside to right handed batters. I have the league average BABIP at .285, and Fangraphs has it at .289. Discrepancy is probably due to dealing with sacrifices.

Weaver has performed better than the league pretty much everywhere, but his BABIP superiority is not concentrated in a specific area. 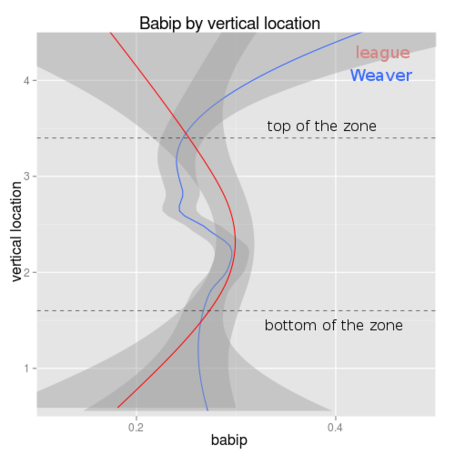 This graph shows the relationship between BABIP and vertical location, with the axes flipped. Dotted lines indicate the vertical borders of the strikezone and gray bands indicate confidence.

Weaver performed pretty similarly to the league on pitches at the bottom of the zone, but was significantly better on pitches in the upper half of the zone. When looking at Weaver's batted ball profile, we see that he allows lots of flyballs, many of which turn into pop-ups. Flyballs go for hits less often than groundballs, a major reason for Weaver's low BABIP. And many of these flyballs are coming up in the zone where Weaver often uses his fastball. Interestingly though, he does not pitch up in the zone any more often than the league does: 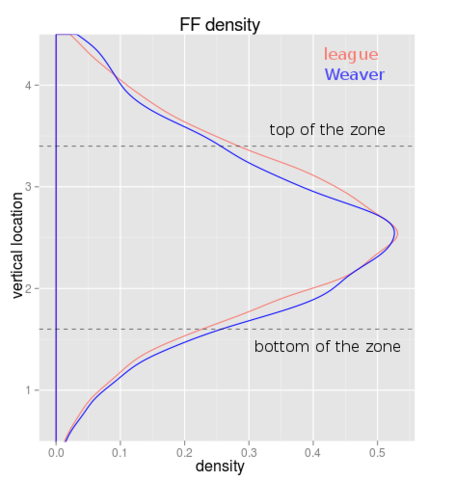 This graph shows the density of the vertical placement of four-seamers, with Weaver being the blue and the league being the red. The axes are flipped and the dotted lines represent the vertical borders of the strikezone. As you can see, both are pretty much normal distributions with the same center. If anything, Weaver pitches lower in the zone than the league does.

And if you're a heatmap kind of person, here is where Weaver performed compared to the league in a multidimensional format: 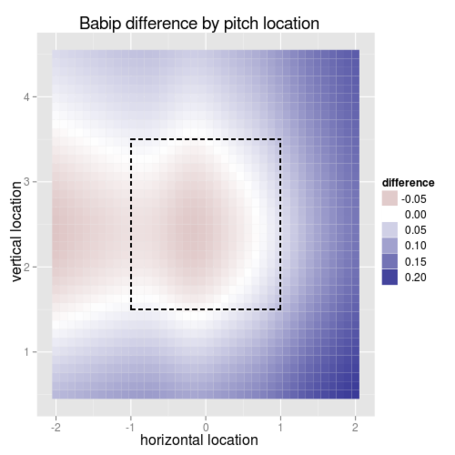 As you can see, he is better than the league pretty much everywhere in the strikezone. And be careful not to pay attention to the red mass on the left side of the graph because the sample gets very small at those points, so any conclusions about his BABIP ability on balls inside would be...iffy. I also wouldn't pay attention to all the blue outside of the strikezone, that may just be due to a few outliers.

A lot of Weaver's BABIP ability seems to come from his unique fastball, and his corresponding ability to induce weaker contact than average on pitches up in the zone. However,  pretty much all of his pitches are above average in terms of BABIP, suggesting that his hit suppressing ability is based in skills that are more universal to all of his pitches - deception and command.

I also really like to watch Weaver pitch, so I leave you with some embedded video from MLB.com: