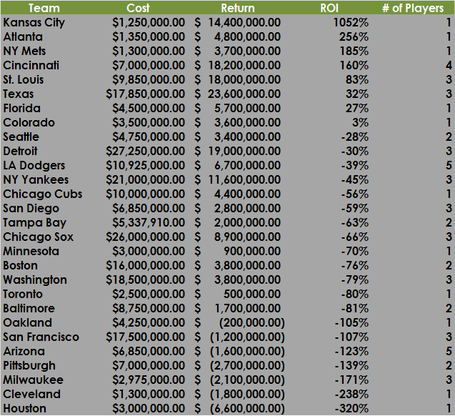 Yesterday, I discussed those 2011 positional free agents that have already paid for themselves (some several times over) with their performance on the field this year.

Today, I want to look at how teams overall fared with their investments this past off-season.

To do that, I simply took the data set of positional free agents, their cost, and return to date and aggregated them by team. (Note the data was pulled in February, so not all signings are represented.)

The team with the best ROI on their positional free agents so far (min. 2 signings)? The Cincinnati Reds.

Three of the four free agents the Reds signed have provided an ROI over 144% so far. And the fourth, Edgar Rentaria, is just about on pace to break even by the end of the year. Miguel Cairo ($1M investment, $6.8M in value), Ramon Hernandez ($3M, $8M), and Fred Lewis ($.9M, $2.2M) have all provided fantastic returns. Overall, the Reds turned $7M in signings into $18.2M in on-field performance.

The Cardinals and Rangers have also seen a nice return on their dollars, earning returns of 83% and 32% respectively.

Every other team that signed more than one positional free agent is currently in the red.

What about those teams that just signed one player (or for which I only have data on one transaction)?

The Royals are the clear winner, hitting a home run with Melky Cabrera (1025% ROI). The Braves and Mets also reaped some health returns through their signing of Eric Hinske (256%) and Ronny Paulino (185%) respectively.

The rest of the one-shot teams are unlikely to break even at this point. Carlos Pena in Chicago should come close ($4.4M on $10M investment so far), but others such as Oakland (Matsui - -105%) and Cleveland (Kearns - -238%), and  are set to lose money. Houston has already released Bill Hall ( -320%), who is now providing no value for the Giants.

Now, of course we are only ranking teams based on the outcome of their investments. Whether or not those outcomes were due to superior decision making and approach, luck, or some combination of the two could fill another 12 posts.

For the full list of free agents by team, their value, and ROI see here.