2011 Free Agents that have Already Earned their Money

Share All sharing options for: 2011 Free Agents that have Already Earned their Money

Signing free agents is certainly a volatile game. It's hard enough to predict how a player will perform year to year, and even if you can the value of that performance might not square with what the market is saying about the player's worth.

Back in February I looked at the 2011 positional free agent signings and their wRC projections based on Tango's Marcel system and calculated each player's expected wRC/$ based on their annual salary.

Now, that didn't include anything but offense contributions via the bat, nor did it take into account positional adjustments, etc. In order to get a more complete picture of these signings I compared each player's value year-to-date based on FanGraphs' calculations to their salary.

The table below lists those 23 players that after only 60% of the season have created greater than or equal to their entire annual salary for their respective teams. 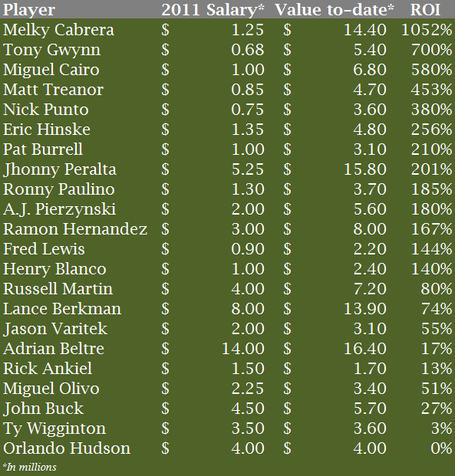 The biggest bang for the buck so far has been Melky Cabrera. Not only has he already earned the value of his contract, but he's provided the Royals with a 1052% return on their initial $1.25M investment.

The highest paid player that has already earned their money (and a little extra) is the Ranger's Adrian Beltre. He's the only 8-figure player to have provided a positive ROI by this point in the season (+17%).

Some of the best returns have come from low-priced catchers. Of the 23 players on the list above, 9 of them are catchers. Those nine catchers have produced on average $4.86M in value for an average cost of only $2.32M--and we are only halfway through the season.

Out of the 62 players in the sample, only 26 of them have earned at last 60% of their salary's value to this point. That means 36 free agents are at risk of proving to be a losing investment this year.

Tomorrow, I will take a look at how teams have performed so far if we look at their positional free agent signings from last off-season as a portfolio.