Share All sharing options for: What Determines the Volatility of Hitters? Player Volatility Part V 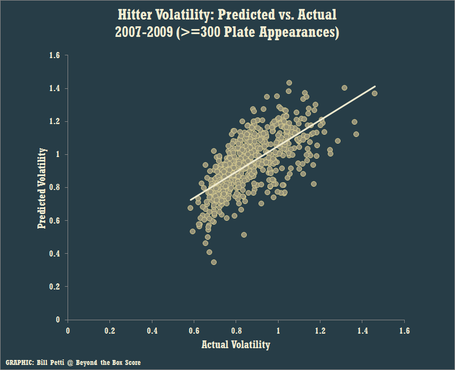 The last time I wrote about player volatility I tried to untangle whether or not Volatility was an attribute of individual hitters that was more or less consistent year to year. The correlation between Volatility in year one and year two was pretty good (.60 and .52 for >=300 plate appearances), but not a slam dunk. Still, the correlation was enough to convince me that it isn't simply random.

So the next question I wanted to ask is what properties/attributes determine how volatile a hitter will likely be?

To answer that question I regressed the individual Volatility scores for each year in the sample by a number of different metrics. The final group that I settled on are shown below in the table along with size and direction of the coefficients and the significance level:

Unsurprisingly, wOBA has the largest affect on Volatility. As you might recall, Volatility was derived using the coefficient of variation of 10-game moving averages of wOBA. However, when we looked at the list of most and least volatile players we did see that better hitters (i.e. those with higher wOBA) tended to dominate the low Volatility list and vice versa.

So if we control for wOBA, what differentiates higher and lower Volatility hitters?

The attribute with the largest affect after wOBA was isolated power (ISO). What was surprising was that it had a positive correlation to Volatility, meaning that the higher one's ISO the higher their Volatility. A 1% change in ISO changes Volatility by 2.5%. My first thought is that ISO is picking up and differentiating the more consistent hitters from the "boom or bust" variety (thinking here of Mark Reynolds). It isn't that high ISO is bad, per se, but rather that beyond a certain level certain ISO scores are more reflective of less disciplined mashers.

The second largest affect after ISO was BB%. The more patient a hitter and the better they controlled the zone the lower their Volatility. This reflects directly in the fact that walks are a part of wOBA, but I think it also suggests that players with greater plate discipline are able to consistently contribute offensively. A 1% change in BB% changes Volatility by 0.9%.

Which leads us to the third variable to affect Volatility, K%. The more a hitter strikes out the more Volatile they are. A 1% change in K% changes Volatility by 0.8%.

The spin on ISO is pretty interesting. To add some perspective, let's take three of the best hitters this year in terms of wOBA that are all relatively close on that measure: Miguel Cabrera, Ryan Braun, and Lance Berkman.

Braun's predicted Volatility for this year is .550. Cabrera's is .604 and Berkman's is .703. Remember, lower Volatility is better.

Of course, any team would be happy to have one of those three hitters. In my mind, Volatility is simply one more way of evaluating and differentiating between similar players. When it comes to the day-to-day grind of a 162-game schedule it may be more valuable to have a lineup full of low Volatility players.

Of course, that's an empirical question and one worth testing.