Are Crucial Games Slower Than Trivial Ones?

Share All sharing options for: Are Crucial Games Slower Than Trivial Ones? 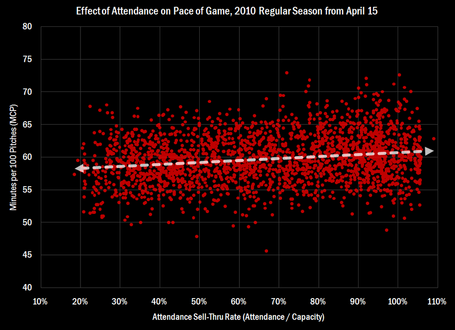 Do teams slow down when there is more at stake?

A quick look at the chart above confirms (or fails to reject) the working hypothesis: there is a clear positive relationship between sell-thru and game pace (minutes played per hundred pitches thrown, or MCP). A chart below the jump shows a similar relationship between team quality (the sum of the two teams' win percentages) and pace. 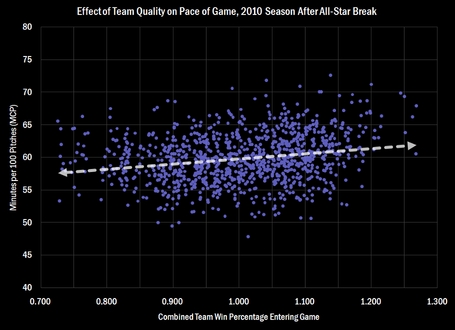 Albeit, the lines don't fit too well to the data points in a simple bivariate relationship, nor is the slope particularly steep, but multivariate testing shows that the relationship is actually rather strong.

Above, we see the same relationship between team quality and pace. Note that both charts are significantly bracketed. The attendance chart ignores games prior to 4/15/10 to avoid including opening day games, which are usually well-attended but have little impact on playoff advancement. The team quality chart looks only at games after the all-star break, by which point the differences between team win percentages have largely stabilized. Both charts include only the regular season.

The real impact of these variables is more obvious when we plug them into a multivariate model that controls for more obvious variables, such as innings pitched, batters faced, pitches thrown, runs scored, run differential and bullpen calls (to name a few). For those of you who want to examine the full models, I've included the coefficient, standard error and significance data below. For the rest of you, allow me to summarize:

*Note that duration and pace are calculated in two different models, with different variables and an all-other-variables-equal assumption, so duration calculations do not necessarily equal pace-by-pitches-thrown numbers.

To confirm the working hypothesis one must to investigate more deeply, with additional years of data and better variables. However, until we develop the equivalent of leverage index for games during a season, these numbers do suggest that, controlling for all else, crucial games take longer to complete than trivial ones.