Breaking Down The First 10,000 Wins Of The Braves Franchise

Share All sharing options for: Breaking Down The First 10,000 Wins Of The Braves Franchise

On Friday, the Braves beat the Nationals 11-1 to bring their franchise record to 10,000 wins and 9,992 losses, not counting the time they spent in the non-major National Association.

The first win by the Braves franchise came back on April 22, 1876, a 6-5 win over the Philadelphia Athletics (not the current Athletics franchise; this one folded after the 1876 season). This accomplishment was over 135 years in the making.

To commemorate the Braves' milestone, I created the timeline below. Click on the image to enlarge it. 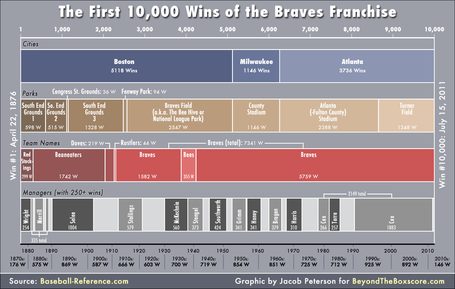 The Dodgers and Cardinals have also won more than 10,000 games if you include their time in the American Association (Baseball-Reference counts the AA as a major league, but many other sources do not).

The Yankees have 9,723 wins, which is by far the most of any American League team. The AL didn't begin until 1901, so the NL teams got as much as a 25-year head start on the Yanks. The Yankees actually have won over 500 more games than the Phillies, despite the fact that the Phillies started 18 years earlier.