The Best (And Worst) Hitters At Making Pitchers Work

Share All sharing options for: The Best (And Worst) Hitters At Making Pitchers Work

I often hear announcers discuss certain hitters' abilities to wear pitchers out by extending at-bats. Of course, there's more to wearing a pitcher out than just having long at-bats. The best way to fatigue a pitcher, in fact, is to simply not make outs. What pitcher wouldn't prefer throwing 5 pitches and getting an out to throwing 3 pitches and giving up a hit?

To combine these two ways of wearing down a pitcher, I created the junk stat "Pitcher Fatigue Factor" (PFF), which is based on the number of pitches a batter sees for each out he makes (not each PA). It's scaled like the "plus" stats (OPS+, ERA+, etc.), so 100 is average and each point away from 100 is 1% above/below average.

Here are this season's top 5 and bottom 5 hitters in PFF: 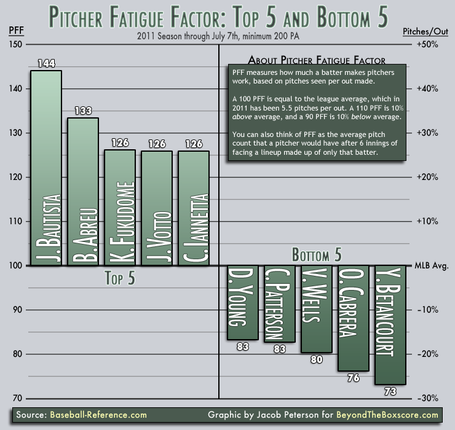 On average, a pitcher needs nearly twice as many pitches to retire Jose Bautista as he does to retire Yuniesky Betancourt. That sounds about right, doesn't it?

Relatively unheralded players like Kosuke Fukudome and Chris Iannetta have actually been among the most wearying batters for a pitcher to face this season. Both have seen 26% more pitches per out than the league average, the same as Joey Votto.

Those 3 are all a step below Bobby Abreu, though. Abreu may be old and slow now, but he can still work an at-bat and get on base with the best of them. Excepting Jose Bautista, of course; Bautista is in a class all his own, seeing 11% more pitches per out than any other player in baseball.

Unsurprisingly, the bottom 5 is filled with free swingers having down years. Some of these players, like Delmon Young and Vernon Wells, were useful last season despite their tendency to have short at-bats. This year, though, they've made lots of outs and haven't seen many pitches in the process.

Others, like Betancourt, Orlando Cabrera, and Corey Patterson, have a long history of frustrating their teams' fans with 1- and 2-pitch outs.

It's pretty simple, really. First, find out how many pitches the player has seen. Next, figure tally the outs a hitter has made. For my purposes, I didn't count reaches on error as outs, but I did count double-plays as two outs.

From there, just use this handy-dandy formula:

This year, the MLB average Pitches/Out figure (LgPitchesPerOut) is 5.5. It's the same for both the NL and the AL, too, so there are no league-based adjustments.

As a side note, a league-average batter will use about 100 pitches to make 18 outs (6 innings' worth). Since 100 is also the average PFF, you can also think of a player's PFF as being the number of pitches that it would take an average pitcher to retire that player 18 times. So a lineup full of Jose Bautistas would require 144 pitches to get through 6 innings, on average.

Here are the rest of the top 15 hitters:

And here are the rest of the bottom 15:

If you have questions about any other players, let me know in the comments and I'll try to get to them.