Share All sharing options for: Putting Jeter's 3000 Hits in Perspective 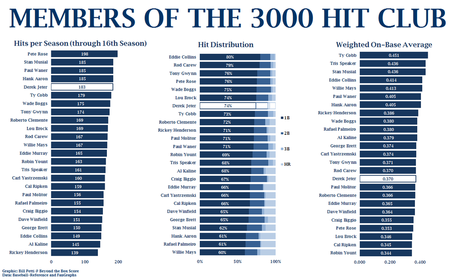 So Derek Jeter has become the 28th member of the 3000 hit club. Jeter has at various times been one of the most overrated and underrated players in baseball. And on many occasions he's been both at the same time. That's not an easy thing to do.

Part of what fuels the Jeter destractors is that he wasn't a particulary good defensive shortstop. Despite Jeter's highlight reel and "the flip", advanced metrics aren't kind to Jeter. Mostly the issue comes from his lack of range.

The other factor is the city he plays in and the team that pays his salary. The Yankees have historically been the dominant franchise in baseball, without question, and that tends to rub many the wrong way, particularly when it comes to the media's mythologizing of Jeter.

When we put Jeter's 3000 hits in perspective, however, we see that he certainly stacks up very well against other members of that exclusive club.

The graphic above compares Jeter against the other members of the club on three different dimensions*.

It's one thing to simply hang around and accumulate hits over the course of a career. In judging how well a player has performed we want to get a sense of the rate of their performance. As far as Jeter is concerned, he's performed very well on his way to 3000 hits. The first chart in the graphic above looks at hits per season for members of the 3000 hit club through their 16th season*.

*Since Jeter is currently in his 17th season I thought this was the fairest way to get a sense of what he's done comparatively speaking.

As you can see, Jeter stacks up very well. Yes, he played more games per year than some historical players, but he's also had one of the higher batting averages during his careers. He's also managed to outperform all of his contemporaries in this category.

Another question when judging performance at the plate is hit distribution. How much damage did a batter do with those 3000 hits?

Again, Jeter stacks up well even though he had one of the highest singles rates of the club (74%). A few players with his singles rate and above had more doubles, but Jeter has by far and away more home runs. Is this somewhat a park and era-factor? Sure, but bottom line Jeter was pretty productive with his hits compared to other 3000 club members.

To put a finer point on it, weighted on-base average tells us how productive a player was per plate appearance. When we look at career wOBA we see that Jeter is far from the highest on this list, but he comes in with a .370 which is nothing to sneeze at. And while Jeter's era inflates his wOBA a bit compared to older players, his wOBA is still higher than just about all of his contemporaries on the list.

On top of all that, Jeter also has one of the highest batting averages on balls in play relative to this exclusive club. To have an above average BABIP for a year or two could simply be luck. But to have a consistently high BABIP over 16 seasons means you've got something besides luck working for you.

So let us salute the Yankee captain on his historic achievement. Whether you love or hate Jeter you can't help but acknowledge that he has been one of the greatest players in history. And while it is true that in many ways Jeter's mythology, not just his on field performance, has come to dominate how he is viewed and evaluated by many that on field performance does rank among the very best in history.

*The list includes only players that accumulated their hits in the AL-era (1901-present).