Where Are All the Runs At? Part III

Share All sharing options for: Where Are All the Runs At? Part III 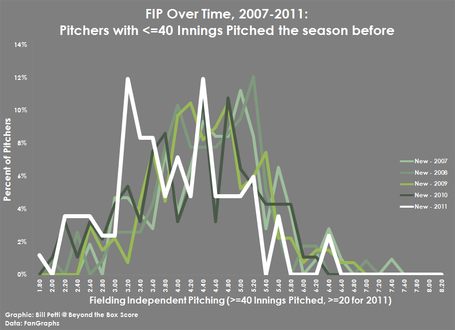 Following up on part I and part II of my look into the changing run environment, I decided to map the 2011 data onto the existing charts to see if these year's crop of young pitchers is responsible for the further decline in scoring this year.

My initial conclusion is no. The chart above maps the Fielding Independent Pitching (FIP) for pitchers in 2011 that logged <=40 innings last year. Once again, pitchers in this category this year have improved their FIP over their counterparts last year.

However, the movement is in line with FIP for returning pitchers as well: 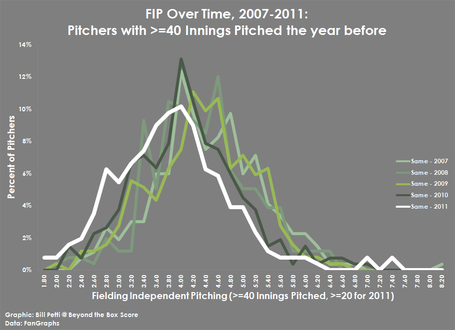 Here are some numbers to further illustrate the point:

If we bundle pitchers by FIP ranges we see that the most drastic improvement of "new" pitchers relative to returning pitchers took place between 2009 and 2010.

Now, part of what is likely driving down the returning pitchers FIP this year is the fact that all those great new pitchers from 2010 are now classified as returning.

Bottom line: the league is flush with great, young pitching. The 2011 class looks pretty good, don't get me wrong. It's just that these numbers suggest that the 2010 crop was just as good, maybe even better.