Is Daniel Hudson one of Baseball's Elite Starters?

Share All sharing options for: Is Daniel Hudson one of Baseball's Elite Starters?

It's never easy to foreshadow the potential outcome of a trade at the time of it's occurrence. In the case of the Daniel Hudson (and David Holmberg) for Edwin Jackson swap, this clearly was a different story. It never made sense -- at least in the eyes of yours truly -- as to why the White Sox would give up two young pitchers, one of them a Major Leaguer with six years of additional team control, for a 27 year old right-hander with at the time, not a single season of an under-four FIP.

Although Edwin Jackson slightly got his act together with the Sox, and is currently pitching himself a fine season on the South side, the other end of that trade features a pitcher who ranks statistically among some of the best in the game. That would be Daniel Hudson, and since his 2010 debut he's been nothing but solid.

Not only is Daniel Hudson one of baseball's most effective arms, but he's also one of the most unheralded. His name is always forgotten when the elitest of the elite arms, or "aces" if you will, are discussed. In addition, over the past year, he's progressed and improved a great deal by continuing to limit fly balls and baserunners.

Needless to say, his BABIP has remained around the league average despite not racking up a ton of K's accompanied by a large amount of fly balls. I'm sure you all are wondering what kind of crazy pollyjuice potion I've consumed that makes me think Hudson is one of the top arms in the game. As Tom Marvolo Riddle said, "I wont tell you, but I'll show you."

In order to determine the data to prove that Hudson is in fact one of the best and underrated pitchers in the game, I backtracked FanGraphs a calendar year. Meaning, the data I'll be using dates back from June 30th, 2010, up until now. Hudson's 1st start of the season last year was July 11th. However, he's still 29th in baseball in innings pitched since a year ago today. 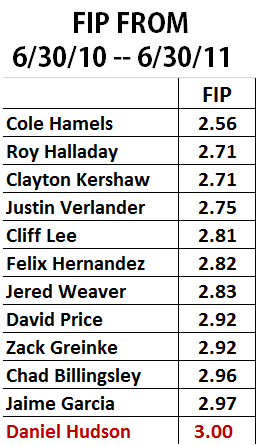 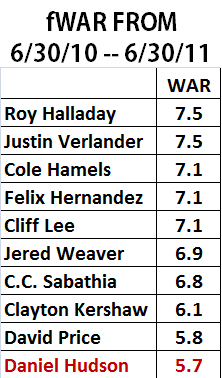 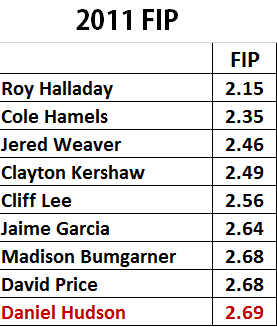 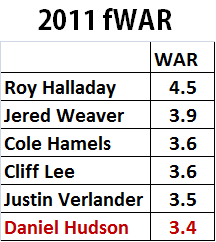 Hudson doesn't posses overwhelming peripherals nor has he put up crazy velocity readings this year or even last, but he keeps the ball in the park and limits his walk rate. He's fullfilled his ZiPS projections for the most part, except better. His FIP, BB%, HR% and innings total -- just to name a few -- have exceeded his expectation.

Despite some luck on out-of-zone contact, over the past 365 days (or 352, to be exact) Hudson couldn't have solidified a rotation spot better than he has. As I previously mentioned, his BABIP is almost exactly league average and his Updated ZiPS project it drops by only one point, giving us many reasons to believe he wont dramatically regress.

I personally was surprised by the length of his effectiveness, more-so than his effectiveness in general. Even so, his K/BB rates and BABIP by month haven't been too crooked and remember, he pitches in Chase Field as well. While the aforementioned evil updated ZiPS says he will regress slightly -- ZiPS projects his FIP to rise thirteen points, his K rate to improve and his walk rate to decrease -- he could still be one of baseball's best pitchers by years end. A potential 2.83 FIP from a second/third year starter doesn't occur quite often, and when it does, it's usually from one of the game's real special pitchers.